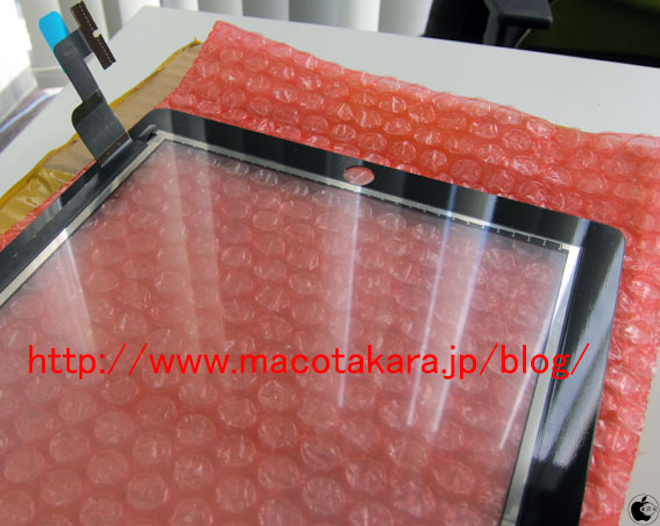 The second generation of Apple’s iPad will come out in 2011, that much we know for certain, the key questions we’re aching to find the answers to are: when will it be announced, when will it ship, how much will it cost, and what’s going to be so different about it compared to the first one? Japanese website Macotakara, which according to Apple Insider has been a reliable source of leaks, say that Apple will host a small even in March to show off the iPad 2 and that it’ll ship soon after. Further adding fuel to the fire is a story from iLounge that says Apple is developing accessories for the iPhone and iPad that use near field communication (NFC) technology, that the new iPad is going to be made out of a lighter material to appease the people who say it’s too heavy, and that there’s a 7 inch iPad living somewhere on Apple’s campus, but it’s not yet certain as to whether or not it’ll ship.

We’ve already seen the LCD from the second generation iPad leak, and now we have a shot of the bezel, but it’s going to be the guts that’ll have to change for it to compete against the slew of Android 3.0 powered tablets due to hit the market this summer. They’ll all feature a dual core processor from NVIDIA, and the higher end devices, like the Motorola Xoom, feature a 1280 x 800 pixel resolution screen and HDMI output. Now Apple doesn’t necessarily need to compete on hardware, it’s their software that’s given them tremendous attention and market share. We’ll be a little honest, iOS is starting to look stale, and what iOS 5.0 needs is a slew of interesting features and possibly a refreshed user interface, but that’s not stopping us from lusting the Apple devices we walk past when we browse our local gadget shop.

Things just couldn't look any worse for AT&T as Will.I.Am of the Black Eyed Peas lambasted the carrier for its...