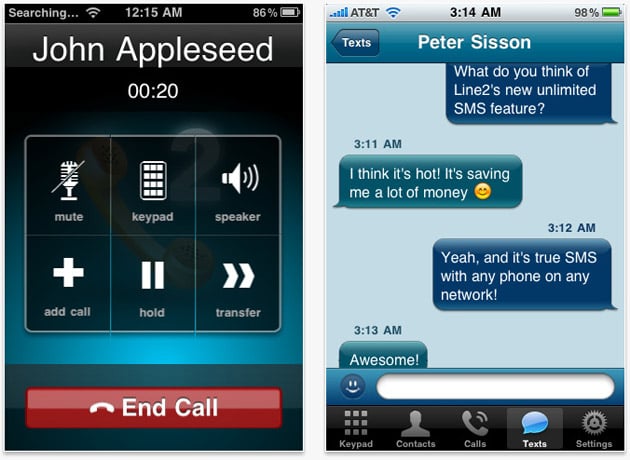 Line2, the popular mobile VoIP app for iOS and Android devices, has a compelling offer for Verizon iPhone 4 users, allowing them to save up to $1,000 per year on their Verizon bill. Moreover, the company is betting on Verizon iPhone’s lack of simultaneous voice and data to entice consumers to use Line2.

As you probably know, the problem with CDMA-based networks (like those operated by Verizon and Sprint) is that they don’t allow simultaneous voice and data. In real-life this could mean that your mobile data hungry apps won’t work while you’re on a call. E-mail, Twitter and other Internet-connected apps will return to their “normal state” when you’re done talking. With Line2, that talk could go through Verizon’s EV-DO network (for mobile data) or a WiFi hotspot, allowing your apps to keep “doing their thing.”

That said, Line2 recommends that Verizon iPhone users port their main number to Line2 at no charge and sign up for the minimum Verizon calling plan – 450 Talk for $69.98 with unlimited data. The company goes on suggesting that by using Line2 as your primary number, you will save between $600-1000 a year compared to subscribing to Verizon’s unlimited plan.

Sounds like a good deal to me. What do you think?

Honestly, I've never been a fan of dinner/restaurant dash-style games. I know there are quite a few such titles available...