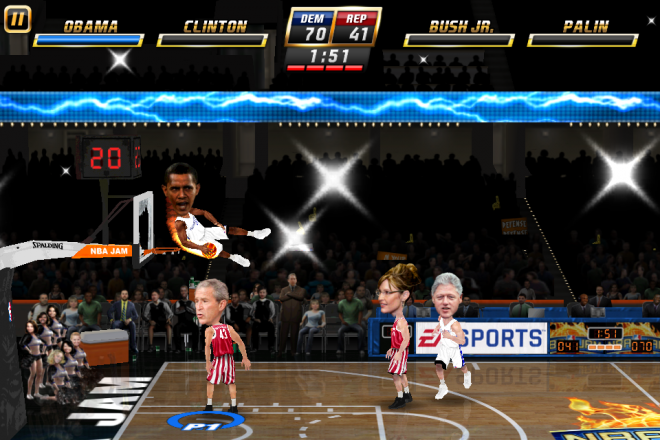 Last week, EA Mobile announced it’ll be bringing NBA Jam to iOS and that was pretty much it. No screenshots, no video, not even a single mention of what teams we could expect or what kind of features will be included. In terms of announcements, it was a bare-bones one. That all changes today as EA Mobile has released some info, screens and a video of NBA Jam in action.

NBA Jam on the iOS will feature all 30 NBA teams just like the console versions of the game. Not only that, but the game will also come with unlockable and secret characters, which of course include President Obama, Sara Palin, Bill Clinton, and George W. Bush, which can be seen in the screenshot above. According to the screenshots, it looks like big head mode will also be an unlockable in the game.

Judging by the gameplay footage, NBA Jam looks like it’ll be as fast-paced as it should be. I like the control scheme EA Mobile decided to go with when it comes to using turbo. I could see it being difficult to tap turbo and then tap the shooting or passing button to initiate a turbo shot or pass, so EA Mobile has made it so the player needs to drag their thumb to the shoot or pass buttons in order to initiate a turbo shot or pass. It completely makes sense and will certainly help in performing some high-flying dunks flawlessly.

As of now, EA Mobile is deciding on what types of modes to offer. It will either include and instant game mode, which allows you to pick your team and play a game instantly, or a campaign mode which will allow you to spend more time with the game as you defeat the other 30 NBA teams. No word yet on multiplayer, but seeing as it’s a competitive arcade baskeball game, I can’t see it being released without at least a local bluetooth multiplayer mode, although I’m hoping EA Mobile will wise up and give us an online multiplayer mode.

RIM had posted then taken down a knowledge base article detailing that as of March 1, they would be discontinuing...