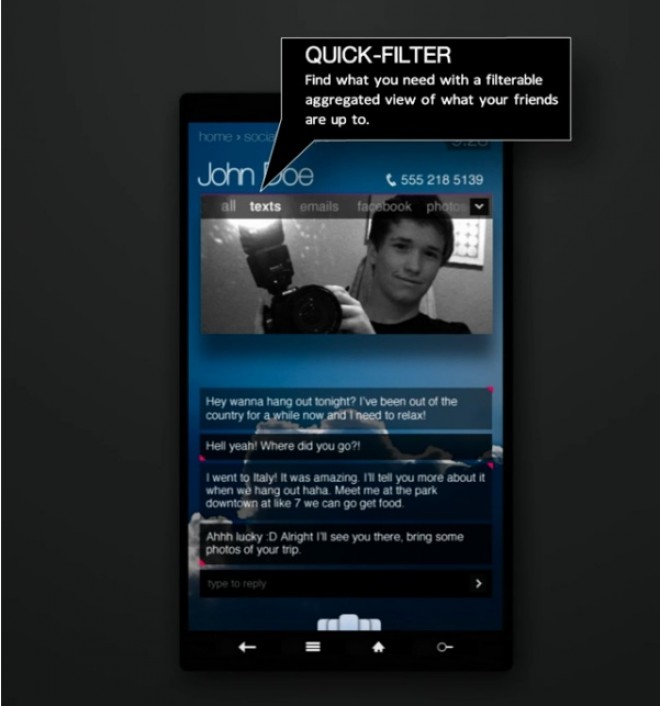 One great thing about Android is the ability to change your default home UI – whether it’s through custom ROMs, or home replacement applications, the dev community has you covered with a wide selection of Android homescreen flavors. The latest such homescreen skin is called Sentio UI, but it won’t be available for some time. And, by the looks of it, it’s going to be one long wait.

At the moment, Sentio UI is nothing more than a concept, so you won’t be finding this app in the Android Market anytime soon, but the video below shows off one of the coolest user interfaces for the Android OS. The Sentio UI looks like it takes cues from Windows Phone 7 as well as Sony Ericsson’s Timescape and Mediascape apps, and the mish-mash looks to work very well. I’d say that this user interface is better than the Sense UI from HTC, which has been considered by many (us included) as the best custom skin for Android that comes pre-installed on devices today.

The video shows quite a few different integrated widgets, but what you don’t see is where the applications are stored. The tabs at the bottom are for multitasking, and switching to different screens. So, what about the rest of your applications? They might be displayed directly on a particular homescreen pane, or triggered by a multitouch gesture, but it’s anyone’s guess at this point.

Thankfully, the folks over at Droid-Life got some interesting information about the upcoming home replacement. First off, it will be months before we will see anything released, and even then it will likely still be in alpha/beta form. It should be available for unrooted devices, meaning that it’ll probably hit the Android Market at some point. There will be tiered payment plans for Sentio UI, as well as a limited free version so you can try it out before you want to make the plunge and buy it.

The Sentio UI will also support tablets in the future, and that’s something we like to hear. We may still be reveling in the “sexiness” that is Honeycomb, but Sentio looks great in its own right.

You can head over to the project’s site here, but you won’t find much as of yet. Either way, we’re excited to see what comes from this.

INQ Mobile has been hard at work making a heavily customized Android phone - you can also call this the...