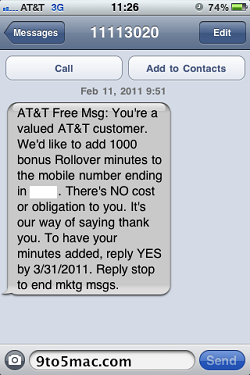 It looks like AT&T is going all out to stop people from switching to Verizon, as the carrier is offering some iPhone users 1,000 free minutes on credit.

According to 9to5Mac, some AT&T iPhone users are receiving text messages which say users can get 1,000 bonus rollover minutes at no cost. You simply have to reply “YES” by the end of march and your account is filled with free minutes.

This is obviously a move by AT&T to stop users from switching over to the Verizon iPhone. The Apple smartphone on Big Red sold out its preorder stock in just a few hours but the launch day was relatively subdued for an iPhone launch – even if it was a launch of a 7-month old phone on a new carrier.

This is just the latest move by AT&T to appease its iPhone owners, as it recently offered some users a free microCell to boost in-door coverage using the consumer’s broadband connection. Many users have told me that they wish AT&T would have done more to make sure its iPhone users were satisfied before they actually had a choice of another carrier.

Still, despite what Jon Stewart says about the Verizon iPhone, AT&T’s service isn’t as bad as many like to make it out to be. Sure, it’s absolute garbage in places like San Francisco and New York (where most of the tech press resides) but much of the rest of the country gets solid voice and data coverage.

Additionally, many AT&T iPhone customers are in the middle of a contract and when you factor in the early-termination fees, it’s quite expensive to hop over to Verizon. We’re also expecting Apple to show off a new smartphone this summer too and there’s no guarantee that it will land on Verizon this summer.

Growing up playing video games in the 80s and 90s, I’ve played my fair share of side-scrolling beat-em-up games. Final...