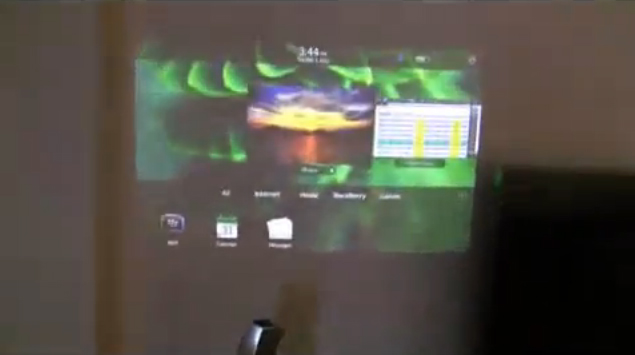 The BlackBerry PlayBook tablet was announced with HDMI-out capabilities, but it hadn’t been shown in action. Today, a video demo shows the PlayBook hooked up to a projector, and streaming HD video and the native OS to the big screen with little problem whatsoever. At 1:51, it looks like the video jumps a little bit, but I’m sure the OS is still being fine-tuned for stuff like that. For business-types that do a lot of PowerPoint presentations, the HDMI-out feature will likely see a lot of use, and no doubt consumers who want to carry their movies around with them but still watch them on the big screen at home will nab an HDMI dock.

Though marketed as an enterprise device, the PlayBook has a lot of consumer-friendly horsepower behind it, like a dual-core 1 GHz processor, 1 GB of RAM, a 7-inch 1024 x 600 display, 5 megapixel camera on the rear, 3 megapixel front-facing camera for video conferencing, Wi-Fi and Bluetooth. The PlayBook is still well-suited for security-conscious companies, since no personal information, like contacts or e-mails, reside locally on the tablet, but rather only show up when paired with a BlackBerry smartphone. The requirement to pair will probably irk consumers, especially anyone packing anything other than a BlackBerry, but that’s another topic altogether.

It’s expected that more features like HDMI here will gradually be shown off as they’re finalized in the new QNX operating system, which was exactly the case with portrait orientation, and, I suspect, running Android apps. I’m really hoping that we get to see a few more nuggets at Mobile World Congress next week.

We know that the Galaxy Tab 2 will be shown off in a few days at the Mobile World Congress...