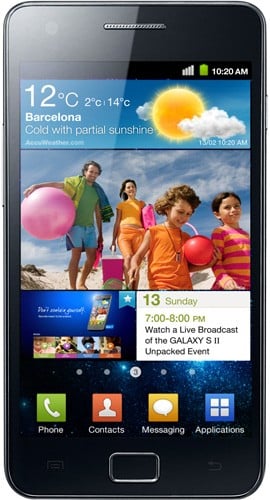 A press photo and the specifications for the Samsung Galaxy S2 were leaked prior to the handset’s expected official unveiling at Mobile World Congress next week in Barcelona, Spain. According to details on the Korean blog Paran, the Galaxy S2 will include a 4.3-inch Super AMOLED Plus touchscreen display, a 1 GHz dual-core processor (presumably an evolution of Samsung’s Hummingbird line), Bluetooth 3.0, WiFi 802.11 a/b/g/n, and HSPA+ connectivity.

The handset is also reportedly super thin and light, measuring a mere 8.49 mm at its thickest point and weighing a feathery 116g (4.09 ounces). As a comparison, the original Galaxy S is 9.9 mm thick and weighs 119g (4.20 ounces). Android 2.3 will be the OS version at launch and the handset may include an updated version of Samsung’s TouchWiz interface.

Also mentioned in this leak was a 10-inch Honeycomb tablet, hints of which appeared yesterday. The super-sized Galaxy-style tablet will include a 1GHz dual-core processor, an 8-megapixel camera, “full HD” recording (which could mean 720P or 1080p depending on the accuracy of the machine translation), dual surround sound speakers and Android 3.0. Both the Galaxy S2 and this tablet device are expected to be announced next week at Mobile World Congress. We will be in Barcelona covering the events live as they happen. Check out our lineup of MWC predictions and check back often next week to keep up with all the new mobile devices expected to be unveiled next week.