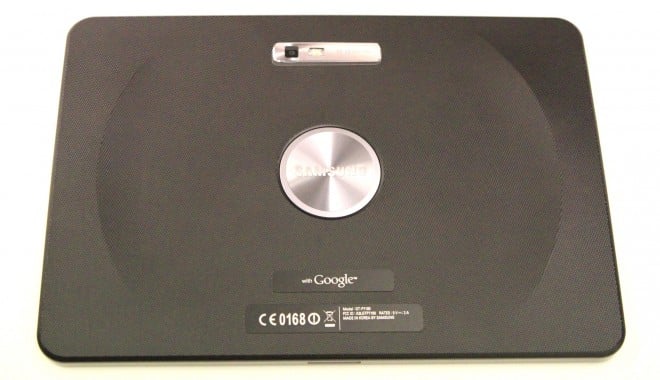 The Samsung Galaxy Tab 10.1 was announced earlier today and we wasted no time in getting our mitts on the tablet. Unlike the first Galaxy Tab, this one runs a version of the platform that has been optimized for the tablet form factor, Android 3.0 Honeycomb.

We’ll get to that in a bit, as the hardware on the Galaxy Tab 10.1 needs to be explained. The back cover has some textured “dimples” or grip rivets that make it more ergonomic to grip. The whole device appears to have been made to be used primarily in landscape orientation, as both the 8-megapixel back camera and the 2-megapixel front-facing camera are in the middle of the device. We’re sure Samsung has a good reason for this.

The Galaxy Tab 10.1 has a 10.1-inch screen as you’d imagine and it still retains a low weight. I miss the portability of Samsung’s original 7-inch model but I’ll take the super-powerful dual-core Tegra 2 chipset in its place any day. This thing packs a 1 GHz punch with a 1280 x 800 resolution and if the results from our time with the LG Optimus 2X are any indication, this thing will have no problem launching apps, multitasking or playing detail-rich 3D games.

There are no physical buttons on the face of the new Tab, as those functionalities are now taken care of with virtual buttons in Android 3.0 Honeycomb. There’s a SIM card on the right spin if you’re holding it in landscape mode and it joins the speakers (there are two on each side for four total) on the sides. The power/unlock button is on the other side and the volume rocker rests on the top of the tablet.

We’ve already taken Android 2.3 Honeycomb software for a spin and we like what we’ve seen so far. It’s easy to customize the homescreen with widgets and app shortcuts and it just has an overall level of polish that will make it comparable to the iPad and other tablet competitors.

Check out the pictures of the Samsung Galaxy Tab 10.1 and we’ll have an HD video with a brief tour of the device.