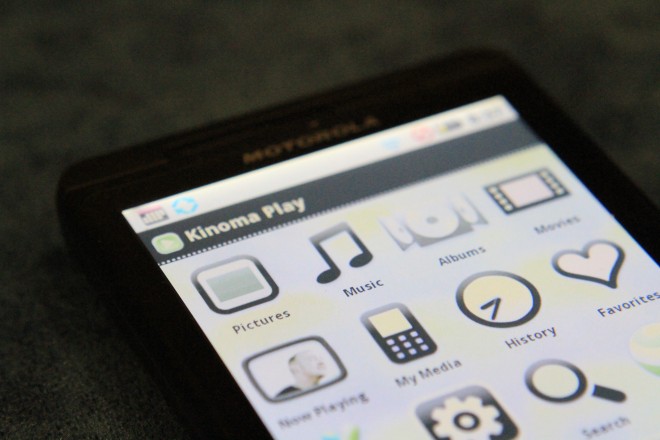 When it comes to smartphone apps, there are a lot of choices, unfortunately even the best apps tend to suffer from framework-related bottlenecks and non-optimized code. You might not think that native Gallery app on your Android phone is all that slow, but take a look at what Kinoma can do with their third-party apps, and you’ll quickly realize that even native smartphone apps pale in comparison to the performance of a Kinoma app.

What is Kinoma? Well, to put it simply, it’s an application platform that runs a virtual environment on your smartphone – like an Android-powered Google Nexus One, for example. But, unlike other runtime solutions (cough, Java, cough), Kinoma integrates with your phone at almost the hardware level, allowing it to optimize apps for speed and power usage. The end result are apps that run within Kinoma’s runtime that can outperform even the fastest native apps out there.

We got a chance to sit down with Kinoma’s Peter Hoddie at Mobile World Congress 2011 to see what the app runtime, recently acquired by Marvell, can do. We were amazed that Kinoma Play was able to load full-resolution pictures in it’s gallery in near real-time. In less than a second, full-res images were ready to zoom and pan in the Kinoma Play image gallery. We were also impressed by the super fast, but still smooth, scrolling capabilities of Kinoma. And, to top it all off, Kinoma Play apps were capable of cross-communication, allowing apps to share their data on demand with other apps.

The idea here is to get Kinoma out to market and get developers to start making apps using the Kinoma platform. Marvell is even taking the Kinoma project open source, allowing consumers to improve on the platform to squeeze out even more speed and power optimizations.

“As digital devices have become more powerful, creating the software to power them has become increasingly difficult,” said Peter Hoddie, vice president of the Kinoma Platform at Marvell Semiconductor, Inc. “Kinoma makes it easier for developers to bring their ideas to life. Kinoma lets developers focus on creating great applications with thoughtfully refined user experiences that taps into the full power of the underlying hardware. We want to make life better for developers, so they can craft the products that make life better for our users.”

We’ll have more in Kinoma in the coming months. In the meantime, keep yourself busy with the video below.

Some quick Android news for the Canadian in the crowd. Our friends at MobileSyrup have it on good authority that...