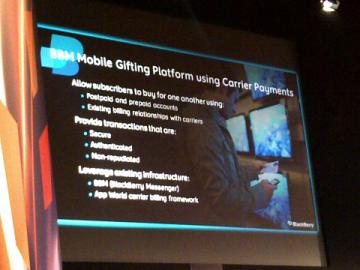 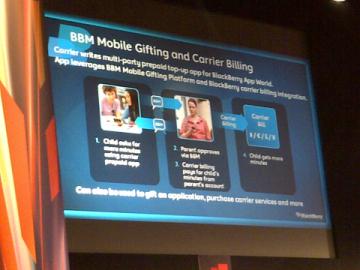 Another tidbit from RIM out of Mobile World Congress 2011 was a new service called BBM Gifting, which will let you buy and send BlackBerry App World titles to friends over the exclusive instant messaging network. The transaction would be made through carrier billing, so you wouldn’t even have to punch in your credit card or PayPal info, it would just be tacked on to your monthly wireless bill. That being said, the BBM Gifting service would also enable the buying of airtime or carrier services, so parents could help pay for their kids’ BlackBerry bill with minimal fuss, and handy in a pinch when the little buggers go over their text message limit.

This move is very much in line with a lot of the payment pipes RIM has been laying down the last year or so with stuff like finally including credit card billing in App World, QR codes, carrier billing, and browser-based app purchases. Both Little Billy and Daddy would need to own a BlackBerry in order to take advantage of the service, which strikes me as a little sneaky since it’s keeping both the inbound and outbound relationship exclusive (rather than say, letting a BlackBerry pay for anyone’s wireless, or letting anyone gift BlackBerry apps), but that would be par for course considering RIM’s nagging people to own a BlackBerry smartphone if they want native app-based e-mail or PIM on the PlayBook tablet at launch.

No info on when the service will be available, but I imagine that will all depend on how many carriers bite at the offer.

Verizon has just announced that they've launched LTE in Detroit Rock City. This is an important announcement because it's the...