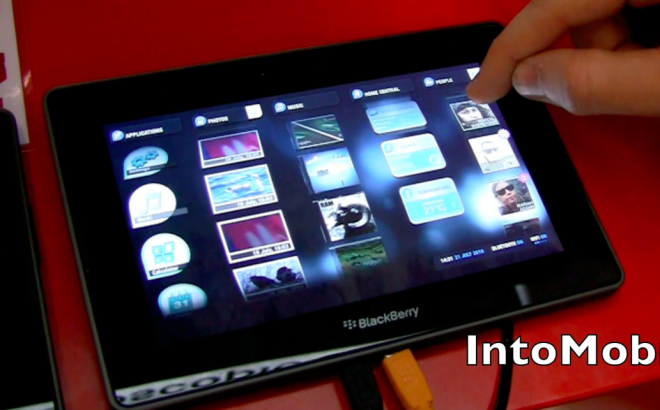 RIM recently acquired Swedish design firm The Astonishing Tribe, and for Mobile World Congress 2011, they were put to work demonstrating just how awesome the BlackBerry PlayBook could be. We got a look at three apps TAT had cooked up for a demonstration at the Texas Instruments booth (since the PlayBook runs on an OMAP 4430 dual-core 1 GHz processor from TI).

The first app made use of the tablet’s HDMI-out to project the user interface onto the big screen (managed by one of the processor cores) while the PlayBook itself showed a simple cursor (handled by the second core). The TV would display a 3D-enabled media viewer, so you could toss on the dorky glasses and look at some video and pictures that would really pop. You might notice some of the UI elements have been recycled from their joint project with Synaptics and a few others called Fuze. The second app is a scapbook that lets you resize, rotate, and assemble pictures with a variety of extra graphics (like thought balloons). Sharing options are built right in, so you can send your glorious creations off to Facebook. Finally, there was a multi-carrousel multimedia management app called Frontrunner that looked freakin’ sweet. Like the scrapbook, the app could handle multiple touch inputs at once without breaking a sweat – 60 FPS all the way.

I know these are just concepts to get developers excited about the potential with the PlayBook’s horsepower, but seriously RIM, just hand over the UI keys to TAT. Let them drive the bus, because if this is the kind of stuff they cook up when they’ve got free reign, I want them to be able to cram as much awesome into the native BlackBerry UI as possible. Yeah, there’s an established set of interface paradigms that the BlackBerry installed base are used to, and the PlayBook as is will be comfortably familiar to anyone who has used a webOS device, but now’s the time more than ever to squirt out something original, and it looks like TAT could do that in their sleep. I wouldn’t be exaggerating by saying that this got me the most excited out of everything I saw at MWC 2011.

At very least, it would be great to see these apps in App World as fully-realized alternatives to native capabilities.  There was one other app from TAT that was a cute weather thing using WebWorks that they weren’t showing at the TI or BlackBerry booth for some reason; video of it is also below.