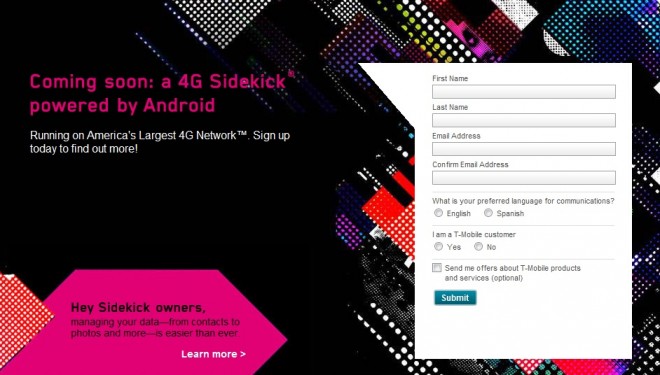 Those who are looking for more information about the upcoming T-Mobile Sidekick 4G have just got their wish, as the sign-up page has gone live on the carrier’s site. If you’re looking to give the Sidekick line another try, the time is nigh.

The Android-powered, HSPA+ toting Sidekick took us by surprise when we heard that it would be made by Samsung, and many still remain skeptical if they can produce a real Sidekick that’s not just an Android phone with a keyboard. We initially thought that HTC would be behind this handset, and many people felt safe with the project in their hands. Nonetheless, judging from the leaked photos we saw a few weeks back, Samsung looks to have made a real, live Sidekick that may have ex-users running back with open arms.

The Sidekick line has primarily been aimed at the younger generation, but if the spec sheet reads well enough, Samsung could sell a decent amount to a larger demographic. We’d imagine if you’re going to revive a dead handset line, you’re going to deliver in all aspects, so we’re really interested in seeing this handset’s spec sheet. Just looking at the keyboard on the handset may make an ex-Sidekick user wet themselves, so hopefully the interior matches the impressive look of the handset.

Just add this handset to the ever-growing portfolio of Android phones coming from Samsung. Any takers?

Hit up this link to stay up to date with this handset.

If you've been looking at iPhone users with envy because you're a Bizzy user but own an Android device, today...