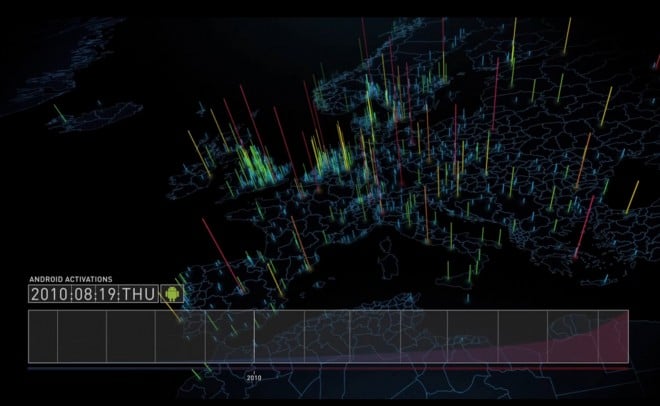 I remember when Google first introduced the mobile platform in 2008 while rumors of a Gphone were floating around like crazy. The company had a crazy ambitious goal: make Android the most ubiquitous mobile platform in the world and bring the freedom of the Internet to the mobile space. Well, as you can see from the Android activations video, it looks like Google has achieved that goal.

In just about three years, Google’s platform has gone from 0% market share to being the most popular smartphone platform in the world. Google’s Eric Schmidt recently said the company is seeing 350,000 Android activations per day and that number should only increase as we see many high-profile smartphones and tablets hit the market.

As you watch the cool video below, it’s interesting to note where the big spikes come with Google Android activations. The T-Mobile G1 produces one because it was the first and only device but the first major spike we see is with the introduction of the Motorola Droid for Verizon. I’m sure the $100 million marketing campaign also helped with that.

It will be interesting to see how big of an impact, if any, the Verizon iPhone will have on Android activations. I don’t think it will be that large, as the iPhone has been available on multiple carriers around the world for years and Google’s mobile platform continues to grow.

February 24 is shaping up to be a weird day in that there is so much going on at once...