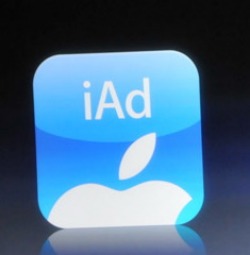 According to All Things D, the minimum bid could give the service a shot in the arm:

Though Apple claims more than 60 successful brand campaigns for iAds and a 100 percent renewal rate, some developers feel the platform has been slow to gain traction. Evidently fill rates–the percentage of ad inventory actually filled with an ad–declined earlier this year, disappointing some iAd Network developers who were making a killing off the platform (Pinger’s monthly revenues, for example, grew from about $20,000 last summer to nearly $1.5 million in December thanks to iAds).

If you don’t remember, the iAd platform was launched with iOS 4.0 and its main appeal was that it gave advertisements all the capabilities of applications. Because it was built into the OS itself, advertisements could do things like full 3D graphics, full high-quality video and access to the accelerometer and gyroscopes.

The results for the Apple iAd platform has been hit or miss though and part of that has been the $1 million minimum ad buy. The company has been aiming for premium brands as this system rolls out but it also meddles with some of the creative aspects of these campaigns. We heard that Chanel dropped its plans because of this meddling.

The Apple iAd platform still has plenty of reach, as there are more than 100 million iOS users and that number will only increase as we see a new iPhone and the second iPad hit the market. If reports that a cheaper iPhone come true as well, the market for these ads will also continue to grow.

As for the competition, Google has said that its mobile advertising is already a billion dollar business but that’s spread out across all the platforms, including iOS.

Apple sends out invites to iPad 2 event for March 2

Apple isn't going about this event invite the way it did with the original iPad launch with splattered art work...