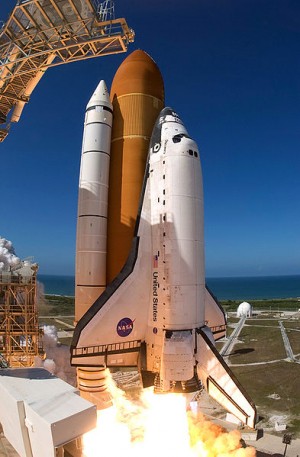 The best camera is definitely the one you have with you, and in this case, the camera that Neil Monday had with him was an iPhone 4 that helped him capture the final Discovery mission. On a flight out of Orlando, FL, Neil and the rest of the passengers on his flight were able to see the Discovery launch for STS-133 – NASA’s current mission.

We’ve seen plenty of iPhone 4 videos before, most of them being professional productions, but this impromptu capture of a historic moment is still damn cool. While there are tons of videos with space shuttle launches, the vantage point from the plane gives us a view with greater scope and appreciation for science. As I watched the video I kept thinking, “It’s insane how it must feel inside the shuttle as it launches. Just imagine how much force it takes to escape the planet’s gravitational pull!”

If you’ve caught any cool video footage on your iPhone when you least expected it, feel free to share it with us in the comments.

Now that the original Gobliiins game is in the AppStore, BulkyPix is following-up with the sequel, which is set to...