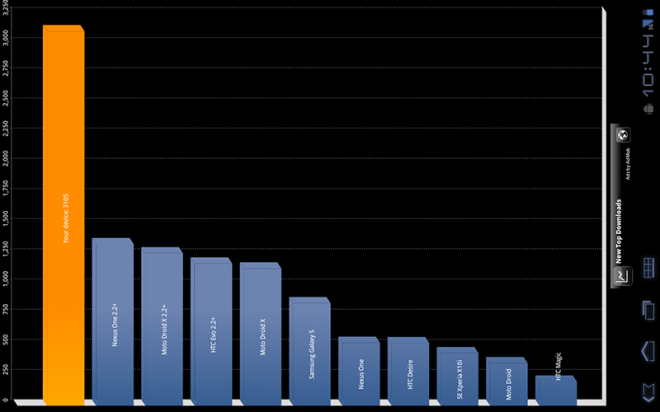 Xda-developer member coolbho3000 was able to overclock both cores of the Motorola Xoom to a blazing fast 1.5 GHz. The stock Motorola Xoom ships with a dual-core Tegra 2 processor that is clocked at 1 GHz. This limit was imposed to protect the device and ensure it runs smoothly and safely. As with anything, if there is a limit, someone is going to break it. In this case, member coolbho3000, the developer behind the SetCPU application, was able to break past this 1 GHz threshold by flashing the device with a modified boot.img with an overclocked kernel.

The new kernel defaults to 1 GHz for safety but also includes 1.2 GHz, 1.4 GHz and 1.5 GHz steps so you can test out various clock speeds, stability and performance. coolbho3000 also updated his SetCPU application to support the Motorola tablet and is in the process of working on a Honeycomb tablet-optimized version. Once he got his Xoom up and running at 1.5GHz, he ran a Quadrant benchmark that was nearly off the charts. His 3105 score trumps the 2226 of the stock Xoom configuration and doubles that of the nearest benchmark standards including the Nexus One and the Droid X.

As with any hack or mod like this, a Xoom owner should perform this upgrade at their own risk. One wrong step and you can brick your device. There is also the minimal risk that overclocking can damage internal components. Lastly, there is a nasty rumor floating around that suggests if you root your Xoom, Motorola will not update your device to 4G when this upgrade becomes available. If this rumor pans out, you may have to choose between faster kernel speeds now or faster data speed later. A difficult decision, no?

[Via Xda-developers and Phandroid]

Motorola to boost Android security on its own

The Motorola Droid Pro was just the company's first attempt to crack into the BlackBerry market with enterprises and Motorola...