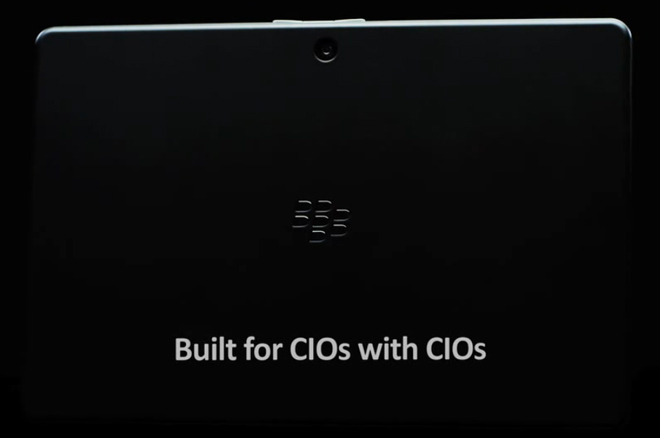 Since its announcement, RIM has been touting the BlackBerry PlayBook as the one and only enterprise-ready tablet, and to further emphasize the point they’ve released a video talking in vague terms about how awesome and secure the thing is. The key phrase in the video is that the PlayBook was “Built for CIOs with CIOs” (Chief Information Officers, the dudes at companies who are in charge of how corporate e-mail is handled). Need for Speed is preloaded on there, which strikes me as sending mixed signals about how RIM is trying to position the PlayBook in the consumer versus enterprise sense; it’s as if they’re pitching two different products altogether.

It has been suggested that in order to satisfy corporate security needs, the PlayBook will act as little more than Bluetooth peripheral that won’t let you access any e-mail or personal information (like contacts or memos) unless it’s paired up with a BlackBerry smartphone. To be fair, I was reassured at Mobile World Congress that not only would third-party e-mail clients from Windows Live and Google be available at launch, a native RIM e-mail app would be available “shortly” after launch, with an emphasis so heavy that I wouldn’t be surprised to see it working out of the box.

The real question about the enterprise-readiness of the BlackBerry PlayBook revolves around remote wiping, granulated policies (who can do what on the device), and rolling out corporate apps. Ensuring that sensitive data doesn’t fall into the wrong hands is a good start and all, but it’s not the whole picture. Part of the difficulty over providing these enterprise features from the get-go is likely due to the PlayBook being only Wi-Fi-only at launch; without a gateway through a cellular service provider and a PIN number, the PlayBook doesn’t have a spot on the BlackBerry Enterprise Server, where it can be properly managed. Of course, that’s all set to change once the WiMAX PlayBook rolls out on Sprint, and LTE and HSPA+ versions find their way to AT&T, Verizon, and T-Mobile. Even those who take the leap early for the Wi-Fi only version will be able to get a hardware upgrade to 4G, much like the Motorola Xoom.

In any case, here’s the video if you want to feel fuzzy-wuzzy about BlackBerry PlayBook security with little to no concrete information.