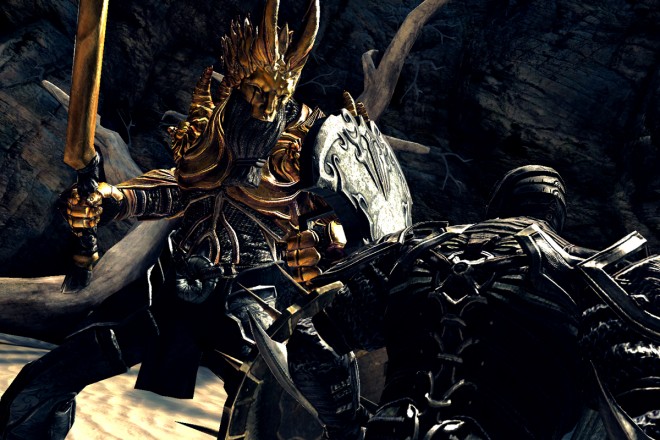 Ever since Infinity Blade was released last December, Epic promised the game would receive a regular dose of updates. One of the updates they promised was one that would allow players to fight one another in grueling duels to the death. An update was released in late December that added a number of new weapons, an enemy, and a raise in the level cap. Today, Epic Games released another update, and even though the multiplayer option is still missing from it, it’s definitely more of a doozy that the previous update.

The Infinity Blade update that is currently awaiting for you in the App Store is called “Infinity Blade: The Deathless Kings” and it features even more enemies, battle arenas, weapons, and overall enhancements. In total, you’ll fight against 10 new enemies as you make your way down into the dungeons to unlock the God King’s darkest secret. If I had to guess what it was, I’d have to go with owning a pair of gold crocs. The God King doesn’t look like he’d be into the latest trend in fashion and that’s what makes it such a dark secret. Just try to get him to not make his way to NYC for Fashion Week, I dare ya!

If you want to know the full list of features that you can expect in the new update, here it is:

Today’s news of the update being available isn’t the only good news Epic Games has to share with us. To celebrate the launch of this big update that lacks a multiplayer component, Epic Games is slashing the price from $5.99 down to $2.99. If you STILL haven’t picked up a copy of Infinity Blade for your iPhone or iPad, then this is the best time to finally cough up your hard earned dough, especially if you plan on picked up one of those fancy, shmancy iPad 2s I’ve been hearing so much about today.

Apple iPad 2 vs The Competition – A Comparison Chart

Today, Apple announced the iPad 2 and the tech world is buzzing with the details about this latest tablet offering...