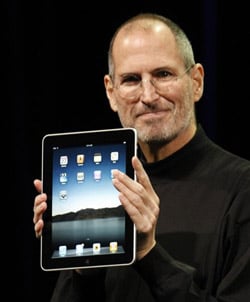 The rumor is that the Big Steve, currently on medical leave, could appear at the iPad 2 event, though it’s not clear whether he or someone else will actually launch the tablet — that’s why it’s rumor cause there are no details.

That would definitely be big news by itself but could potentially hurt the iPad 2 launch with “Steve’s back” headlines (instead of “iPad 2 is here”) taking over the news cycle, according to AllThingsD’s Kara Swisher.

We would definitely like to hear Steve is feeling better, heck even if that initially hurts the company’s sales. With him on them helm Apple will know what to do. And since the succession plan was shot down by shareholders, we’re sure those of you with Apple’s stock love the idea, too.

Even if Steve doesn’t appear on stage, I’m sure he’ll be watching closely for every step his executives make… and eventually spank them for “not being him” when they come back for advice. 😉

We’re only few hours from knowing who will be launching the iPad 2. Stay tuned to IntoMobile…

It looks like Apple's iPad announcement tomorrow will be as much about "out with the old" as about "in with...