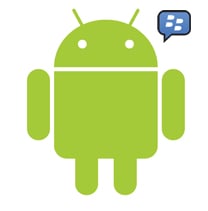 You might have heard that the BlackBerry PlayBook will be able to run Android apps, but what about the other way around – what if Android ran BlackBerry apps? Rumour has it that this is exactly what’s happening; RIM is supposedly aiming to bring the legendary BlackBerry Messenger client to not only Android, but the iPhone and iPad’s iOS down the line as well. RIM had recently put the legal screws to Kik Messenger, which was offering a kind of cross-platform BBM service, and seeing as the legal action surrounded patent infringements, it would be safe to assume RIM had similar plans of their own (though there was also some concern about Kik illegally mining personal data).

BlackBerry Messenger on Android and iOS will apparently be a more stripped-down version, so don’t expect the fancy stuff like file transfers or groups, but basic instant messaging with read/unread notifications seems likely. No mention of timing, except for sometime this year, and pricing is equally up in the air; free, one-time fee, or subscription models are all possibilities.

Is this a smart move on RIM’s part? The exclusivity of BBM to BlackBerry smartphones has been a big selling point, and giving it away to the competing platforms may obliterate what little reason anyone has to pick up a RIM product. On the other hand, if RIM can be tantalizing enough with their app and rope people into using BBM to the point of becoming a necessity, then they’ll be in a position to convince folks to switch teams. The larger strategic message this would send is that RIM is losing faith in their own application platform, and is looking to use the competition to their advantage. The QNX operating system of the BlackBerry PlayBook will take some time to mature if it wants to offer anywhere near as many apps as Android, let alone iOS; in the meantime, RIM could easily take advantage of Google’s openness, even if in the process they’re making significant additions to the Android ecosystem with apps like BBM (and who knows what else… BIS e-mail?). As far as iOS is concerned, I couldn’t imagine Apple being cool with RIM horning in on their app market to woo loyal iPhone owners to the black side, but I’m sure Google would be hunky-dory with the idea of getting their tendrils into another manufacturing partner.

RIM hasn’t been shy about cross-platform work in the past – you may remember the BlackBerry Application Suite for Windows Mobile. It didn’t exactly take off, but that had more to do with WM’s puny market share than RIM’s product. Maybe another go at that strategy with a more popular smartphone OS isn’t such a bad idea… what do you guys think? Just remember to take it all with a grain of salt – there’s no hard and fast evidence of RIM making this move just yet, though the source sounds pretty confident about Android getting BBM.