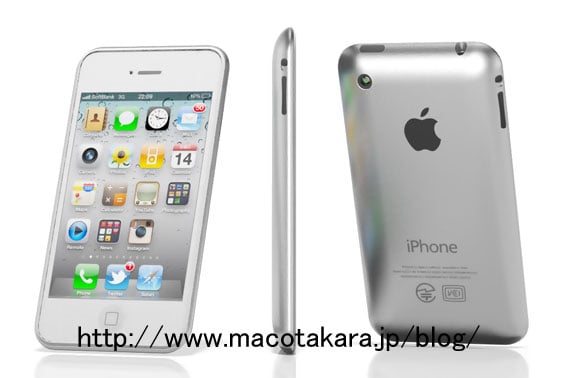 Now that the iPad 2 is out, we’re all looking to the future and Apple’s next release – the iPhone 5. Rumours from China suggest that Apple will be skipping the external antennae design, using aluminum for the rear instead, and that it will include the dual-core A5 chip used in the iPad 2. This concept rendering of the iPhone 5 above shows how it might look, and it’s easy to imagine how the back would be a little more durable and lighter than glass. Apple also wouldn’t have the issues with white paint that apparently plagued the iPhone 4. The external antennae is out of the picture, apparently; instead, Wi-Fi and cellular will be pumped through a resin Apple logo on the back. That’s kind of a no-brainer considering how much of a headache the Death Grip was.

Like many manufacturers these days, Apple’s attention is divided between tablets and smartphones, but the Verizon iPhone 4 launch should keep consumer interest until their next handset is ready to roll.  I’d take all this information about the iPhone 5 with a grain of salt for now, since we probably won’t hear anything official until the summer, but at least it sounds viable.

Not to be out-done by Rogers, Telus and Bell both confirmed this morning that they would be offering data plans...