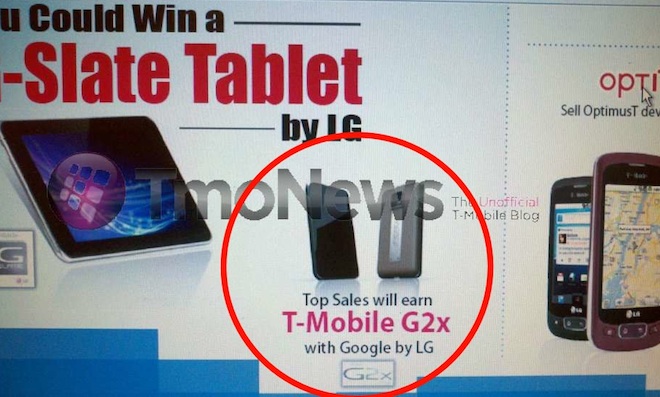 With less than one month left until the end of Q1 2011, we’ve already seen several dual core Android powered smartphones getting announced and one has even hit the market. Expect each and every operator to fight to the death in order to keep up and out do their competitors. T-Mobile USA, the smallest of the four largest operators, is going to be using the LG Optimus 2X as their weapon of choice against AT&T’s Motorola Atrix, Verizon’s Droid Bionic, and whatever Sprint plans on announcing this week at CTIA. They’ll be rebranding it as the “T-Mobile G2x” according to TMoNews, but we’ve got no information as to when the official announcement will take place, nor how much it’s going to be sold for either on or off contract. When we reviewed the LG Optimus 2X we thought it was a decent handset, above average even, but personally I wouldn’t recommend buying a dual core smartphone until the second half of this year.

Having two processors inside the tiny computer that fits into your pocket is incredible, don’t get me wrong, but the software simply hasn’t caught up. The only version of Android that’s optimized for dual core usage is Honeycomb, and right now that’s exclusively for tablets. There’s going to be an update to Android 2.3 called Ice Cream, and while information about what features it’ll bring to the table are limited, we do know that some tweaking has been done in order to optimize it for multi processor devices.

If you want to be an early adopter then nothing is going to stop you. You simply have to have this. But if I was forced to make a choice however between this and say the Galaxy S 4G, the first smartphone T-Mobile offers that takes full advantage of their 21 Mbps HSPA+ network, I’d go with the latter. Network speeds are now the bottleneck these days, not horsepower.

Asus has been super busy recently. During the CES, we've seen the Taiwanese company unveiling few cool tablets and afterwards...