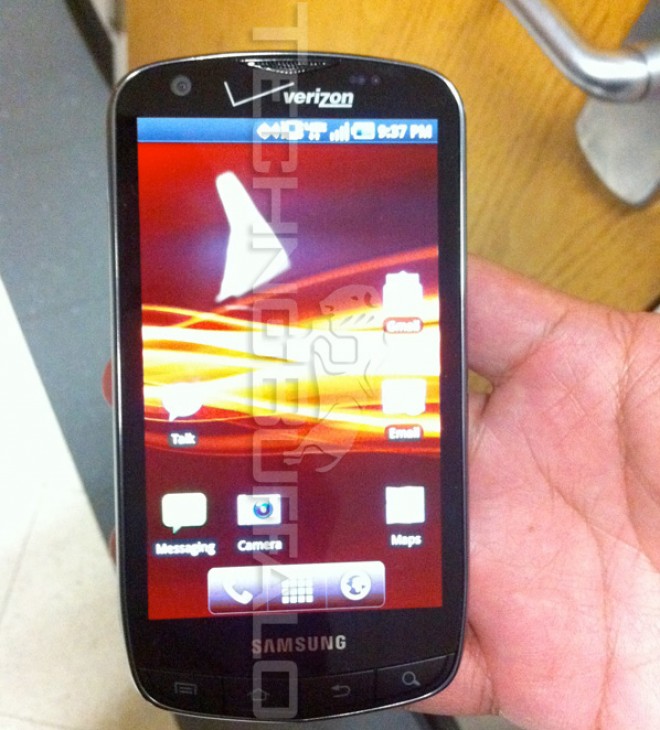 Samsung ironically decided to name their next Android phone the “Stealth,” which is funny, because it just leaked out to the world – not very stealthy. We got some hands-on time with this handset back at CES, but this new leak is the handset’s first appearance in the wild.

The powerful handset hit the FCC recently, giving away its name. The phone didn’t have a name at CES, but that seems to be all cleared up now. The Stealth will be upgradeable to Android 2.3 Gingerbread, but since it has yet to be announced, there’s no telling when it will get any sort of update.

The Stealth has pretty nice spec sheet, and it reads a little something like this:

While we’d rather see the Stealth sporting a bit more power under the hood in the form of a dual-core CPU, the Hummingbird processor should still perform like a champ. However, if you just need to get on the early-adopter’s train, Verizon has something with a bit more power that may be more suitable for you.

The Stealth’s shape is nice and curved, which will make for a better in-hand feel, but the four buttons on the bottom could be another story. After becoming accustomed to capacitive buttons, physical buttons seem like a step back to me. That said, it’s more about personal preference, and some of you may need physical buttons, as they are a bit more reassuring when pressed.

With all the trouble that’s been mounting with the Thunderbolt, could the Stealth gain enough traction to overshadow HTC’s offering? We can expect the Stealth to hit sometime in mid-April. Takers?