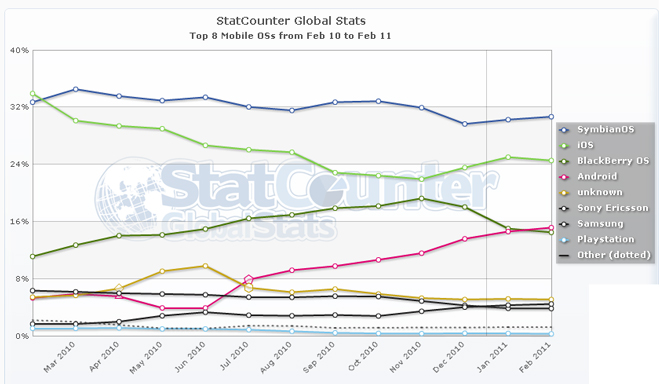 Some recent data from StatCounter has revealed that Android web traffic has edged out that of BlackBerry. Of the 15 billion page hits and 3 million sites StatCounter monitors, 14.52% came from BlackBerry handsets, while 15.16% came from Android phones. I’m surprised it’s that close of a race given how mediocre the BlackBerry browser is, but I guess installed base counts for a lot. iPhone still rules the roost, with 24.56% of sites being hit up by an iOS browser in February, while Symbian still clings to the top spot with 30.66%.

Android’s progress in mobile web traffic isn’t entirely surprising given that Android is the most popular mobile OS in the U.S., is outselling Symbian worldwide, and consuming the most wireless data. Still, Android has other areas to improve on before it can claim utter and complete dominance; manufacturers and app developers make more money on iPhone and BlackBerry right now.

Even though this graph makes it looks like the mobile web is still popular in light of most things getting slapped into an app form, the GSMA says apps are growing at a faster clip than mobile web sites.

Finally we have the official press release from SK Telecom in which it says the iPhone 4 will start selling...