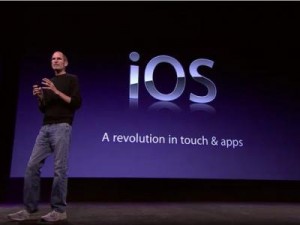 Apple released iOS 4.3 today and it brought a host of new features and bug fixes to iPhone and iPad users. However, it looks like iOS 5 might not be too far away as a new rumor suggests that the next version of the mobile OS will be unveiled at a media event in early April. In addition to the new version of iOS, we’re also hearing that a new version of MobileMe will be announced, too. Could this be the free version we’ve all been hoping for?

Last year, at around the same time, iOS 4 was unveiled and new features like multi-tasking (or fast app switching as some like to refer to it) and additional customizations were introduced. It was also when Apple decided to change the name of its operating system to iOS from the old “iPhone OS,” which was appropriate given its use in the iPod touch and iPad.

Naturally, the timing makes sense since Apple tends to stick to a pretty rigid schedule for when it releases new products.

For MobileMe, we might be seeing free accounts that are limited, and subscription accounts with more options. Last month, Apple stopped selling the MobileMe boxes, leading many to speculate that a revamped version was coming soon. In fact, even Steve Jobs said that MobileMe was going to be new and improved in 2011.

If this rumor is true, we’re only a few weeks away from the unveiling of iOS 5 and the new MobileMe, which is pretty exciting. As a personal note, the timing works perfectly for me since my own account will be up for renewal in another week or two, so here’s to hoping something succeeds the current service.

The white iPhone 4 may finally be going into production

Just in time for the rumors of the iPhone 5 to start heating up, Apple is reportedly starting production on...