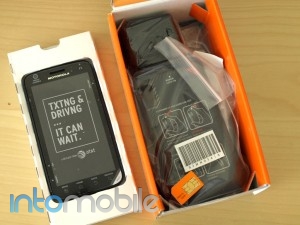 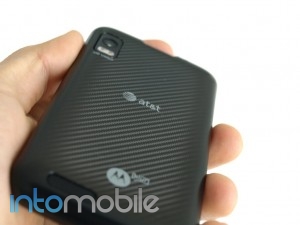 The Motorola Atrix 4G continues Moto’s recent string of good-not-great hardware design but the specs inside this thing more than make up for some of the flaws.

There are nice curves along the back and sides of the device to make it fit comfortably in your hand and the weight is just right. I’m not in love with the super plastic feel of the back cover (nor how difficult it is to take off) but it’s a good looking and great feeling phone.

The face of the device is primarily occupied with the 4-inch qHD screen and it’s bright and responsive. It’s no Retina Display or a Super AMOLED Plus screen but it’s still really good. I don’t watch much video on my phone beyond a YouTube video or a sports clip but the 16:9 aspect ratio does come in handy if you want to watch some long-form content on a plane or on public transportation.

The face also has a notification light, a front-facing camera that works well enough and four capacitive buttons for the Android commands (Settings, Hone, Back, Search). All of these work as it should.

Moving to the sleek, curved right spine reveals a decent one-piece volume rocker. I prefer this to be two separate buttons but what can you do?

The top and bottom are relatively bare and I like that (headphone jack is on top) and the left spine has the miniHDMI port and the microUSB port.

On the back, you have a 5-megapixel camera, dual-LED flash and a label saying “HD Video.” Unfortunately, this doesn’t do full 1080p HD video like the Optimus 2X but that will be coming as a software update in the not-too-distant future. Recording at 720p HD isn’t bad at all but you can’t help but want all the features your phone is capable of at launch. 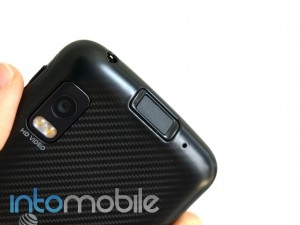 The Motorola Atrix 4G also has a fingerprint scanner that doubles as the power/unlock button. You don’t have to turn this on and this button just becomes a standard power button and I’d recommend keeping it that way.

The setup for the fingerprint scanner is easy: swipe your left and right pointer finger a few times and it will recognize it. In practice though, I’ve found this works well about 85% of the time and that can be annoying if you’re constantly checking your phone like I am. Sometimes the fingerprint wouldn’t verify or the swipe was too fast – it just became a pain. It’s probably worth it for the security value for enterprise users but the average user may find it more trouble than it’s worth.

The Motorola Atrix 4G just isn’t about looks though, as this thing packs some beastly specs including a dual-core Tegra 2 processor and 1 GB of RAM. This should lead to an amazing experience but it doesn’t. The problem is that Android and most of the apps aren’t optimized for dual-core so you get a faster experience but not one that’s leaps and bounds better than a single core 1 GHz core for now. The 1 GB of RAM is a different story though, as switching between apps and browsing the web is a smooth-as-butter experience.

Still, buying a smartphone is a long-term investment and the Tegra 2 chip and the amount of RAM in this means that the Atrix 4G should continue to be a badass phone in a year from now and that’s always a good thing. I don’t mean to discount the current experience either, as it’s fast and zippy for the most part (more on that later).

Overall, the look and feel of the Atrix 4G are high quality and the future-proof specs mean your device will continue to be a heavy hitter for a long time.

I sincerely understand the neato burrito factor of the Laptop Dock: having all of your information and contacts in once place is a good idea. I do think that the execution and price leave something to be desired though.

Plugging your Atrix 4g into the Laptop Dock brings up the WebTop software and it’s a solid mix of the OS X UI and Android. This gives you access to a full Firefox browser while still letting you get texts, phone calls and app notifications.

My problem with this is that the build of the device isn’t great – the trackpad is just a mess. Additionally, Android wasn’t really designed for a full keyboard, so you’re living in the WebTop software, which is still not as good desktop operating systems you’d want in that environment.

Even worse is the price of the LapTop Dock: the bundle costs $500 and forces you to get the $45 a month tethering plan. That’s about $300 for an empty shell terminal, which is about the price of a low-end netbook.

This is just not for me. 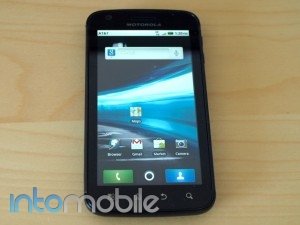 The Motorola Atrix 4G uses Android 2.2 with MotoBlur and I really, really wish this had 2.3 Gingerbread on it. It runs smoothly and it’s easy to browse the web, download new apps and make calls but I don’t see why this had to launch with an older version of the software.

It’s likely because Motorola didn’t have enough time to tailor MotoBlur for the latest version of Android and that’s hooey. I don’t find that MotoBlur adds enough to warrant having an outdated version of the software. It’s not like Moto isn’t tight with Google either, as it had access to Android Honeycomb early for the Xoom.

I also had some troubling crashes with this phone and don’t know if it’s a review unit thing or a software or hardware issue. There were multiple times when the phone just wouldn’t wake up. I’d hit the unlock button and the notification light would blink but nothing would happen. This happened multiple times in my time with the Atrix 4G and this was only solved by doing a battery pull, leaving it out for a few minutes and then rebooting. Troubling.

While I’m not in love with the MotoBlur software, Moto did do a good job with its Phone Portal software because you can connect and transfer files via WiFi. You simply hit the icon and then go to a specified web page to check out all the content on your phone. Cool beans.

Other preloaded software includes AT&T Navigator, AT&T Code Scanner and the U-Verse Mobile app which lets you download shows and watch them on the go if you’re a U-Verse subscriber. You can also access the Tegra Zone to find games that are specifically optimized for the Tegra 2 dual-core chip. For more info on the Tegra Zone, check out this video below which shows off the service on a Xoom – performance is similar, although it’s not on as large of a screen obviously. 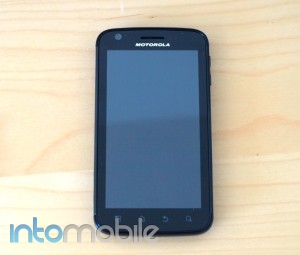 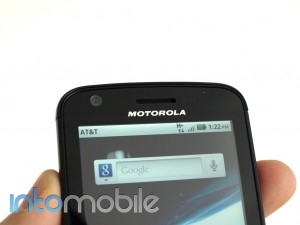 The browser is your standard Webkit one that we’ve seen plenty of times before and it is above average for most web pages and it chew up JavaScript like a champ. One thing that really bugs me about this browser (and most Android browsers) is seeing a message saying it can’t open a new windows because I have the maximum number of windows open already. It’s not hard to dive into my windows and close things but it should be intelligent enough to just close something and let me open the page I want. This is a super, duper minor thing that has been frustrating me for a while on Android and I hope it gets fixed soon.

As for the HSPA+ 4G service on the Atrix 4G, I found it to be a similar experience to the Inspire 4G: speeds are better than 3G networks when you can get solid coverage (rarely dipped under 2 Mbps) but it pales in comparison to the HSPA+ we’ve seen from T-Mobile, the Sprint WiMax we’ve seen with a strong signal and the 4G LTE from Verizon.

The Atrix 4G doesn’t take any great steps to make it a better multimedia device than other Android phones except for the aforementioned U-Verse app, which is really, really good. Still, it’s not quite as good as the iPhone and its iPod/iTunes infrastructure. It should be enough for most, as Moto’s on board software makes it relatively easy to sync content but it’s not as brain-dead simple as the iPhone. I can’t wait for that Google Music to launch. 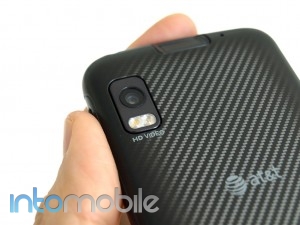 The Motorola Atrix 4G has a 5-megapixel camera with a dual-LED flash and I wasn’t too impressed with the quality of the shots. I felt there wasn’t a crispness to the shots that I’ve seen on other 5-megapixel cameras like the year-old Samsung Galaxy S. The colors seemed a little washed out too and I would have loved a physical camera button. The Dual-LED flash is nice to have but you’re still not going to get great low-light shots.

Still, the photos weren’t bad per se, but I wouldn’t want to rely on this thing as my only camera if I were going on an important trip. That’s not the case with other devices like the Optimus 2X, which I used as my primary shooter while I was in Barcelona for Mobile World Congress and I was able to achieve some wonderful shots that I’ve framed. The zooming functionality of the Atrix 4G does work kind of well, even if you get some graininess.

To be fair, the details do come out on close-up shots and it has all the features you’d expect from a device of this class including the ability to change the scene-shooting mode, add effects, have all your photos upload to an online account and quickly share with Facebook and other services. The front-facing camera isn’t going to win any awards but it’s enough to make some video calls with something like Qik. 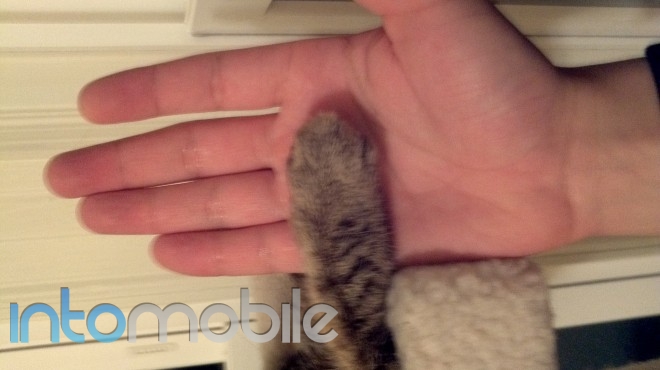 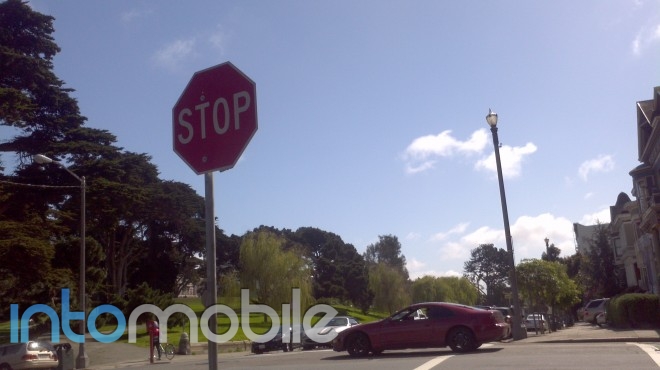 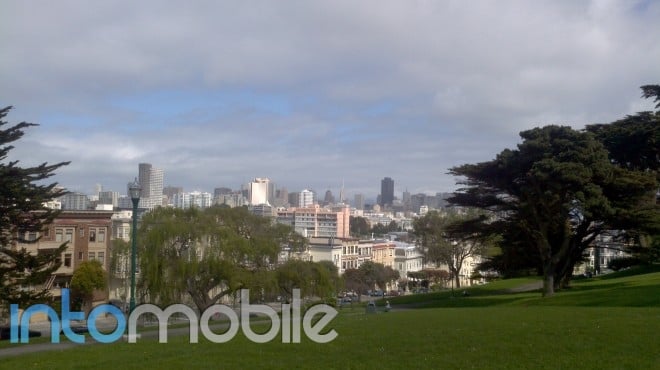 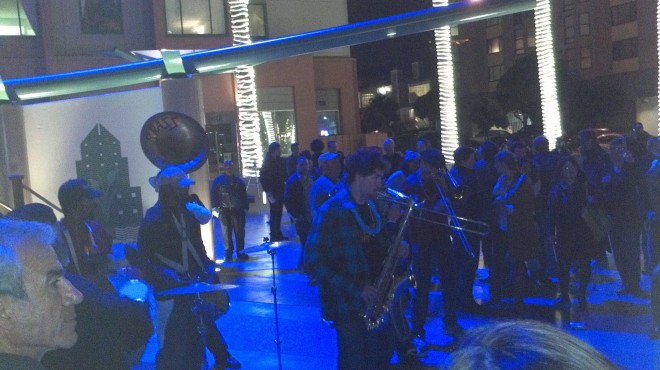 The Atrix 4G performed admirably with the video recording capability at 720p HD but you have to hate knowing that its chipset can do full 1080p HD well. This will be coming as an update but check out the video below to hold you over. 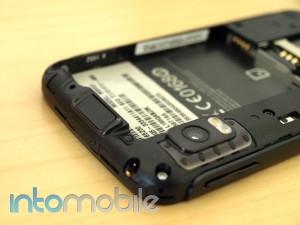 Despite all the super apps and mobile browsing, these things are still phones first and foremost and I was hesitant about the Atrix 4G because of AT&T’s reputation in San Francisco with the iPhone. These fears were mostly unearned, as call and data coverage was strong throughout most of the Bay Area even if data fluctuated a bit. Call quality was top notch too, as many people said I sounded clear and like I was calling from a landline.

The Motorola Atrix 4G is like any modern smartphone in that you’ll get about 8 hours off of a full charge with some heavy usage. I know this because I took it out of the plug at 8:30 a.m. to take the GDC conference, didn’t bring a charger and found it dead by about 4 p.m. That’s about what we expect from these devices nowadays so investing in a second charger for work, or a microUSB cable to plug in makes a lot of sense.

The Final Take: Should you buy this? 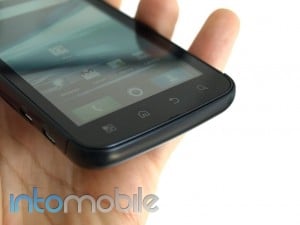 I really wanted to fall in love with the Atrix 4G – the combination of specs and design had me drooling from the second we saw it at CES. After playing with it for a few weeks as my primary device, I think it just misses the mark on too many things for it to be the perfect phone I had dreamed it would be.

That doesn’t mean it’s a bad smartphone by any means, in fact, it’s probably the best Android device on AT&T by a wide measure (we still need more time with the Infuse 4G). The camera, lack of dual-core optimization, useless Laptop Dock and the AT&T 4G network are negatives but this thing should only continue to get better and age gracefully.

It’s not a grand slam but a triple is still not a bad thing, friends.

Let's say you picked up that Nintendo 64 emulator for Android last week. And let's say you have a Wii...