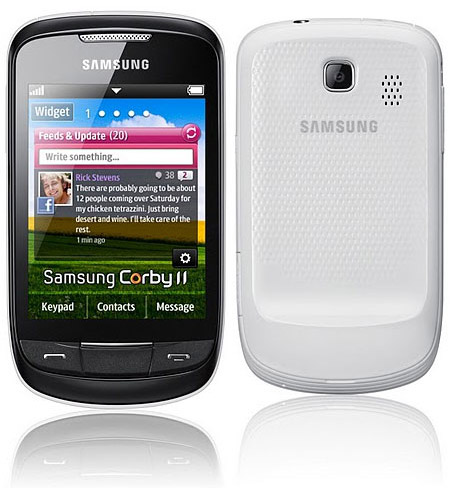 Samsung has officially announced the Corby II, a successor of its wildly-popular Corby model. The device that has already cleared the FCC — though that doesn’t necessarily mean it will be sold in the U.S. — rocks similar specs as its older brother with few added bells and whistles. It comes with a 3.14-inch capacitive touchscreen, 2-megapixel camera, EDGE and WiFi 802.11b/g/n connectivity, Bluetooth 3.0, 3.5mm headset jack and a memory expansion slot that works with microSD cards of up to 16GB. Moreover, its large 1000mAh battery should provide enough juice to keep the phone running for up to 9.5 hours.

As for the pre-installed software, Sammy’s very own TouchWIZ is running the show providing users with a widget-friendly experience. In addition, with the help of Social Hub, users get an easy way to keep up with their social networking buddies while on the go.

With launch date set at later this month, Germany will be the first market to get the Corby II. Afterwards, we expect to see it being rolled out across other countries of Europe, Asia, Middle East and Africa…

Good news if you: a) Live in Canada; b) Want to try out Windows Phone 7; c) Don't mind committing...