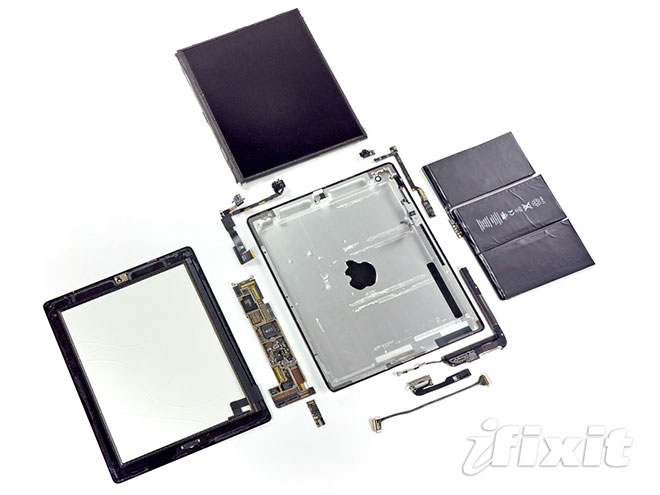 iFixit  got its hands on an iPad 2 and promptly tore the tablet down to its screws and rails. Most notable of all its finding, iFixit revealed the second generation tablet contains 512 MB of RAM, twice as much as its predecessor. This is good news for people interested in the raw hardware specs of the device. Other notable findings and part identifications include:

The iPad 2 is given a rating of 4 out of 10 for it ability to be repaired at home. Due to its new slim design, Apple has removed the tabs that held in the glass front and the LCD. These tabs were replaced with a large amount of glue. The glue makes it difficult to remove the front glass panel and increases the chance that you will shatter the glass while trying to remove it. The LCD and the glass is also thinner on the second generation device as shown below

iFixit points out this thinner glass my lead to higher rates of glass breakage on the iPad 2 and could reduce the overall durability of the device.

Apple iPad 2 unboxing on the streets of SXSW 2011

Hopefully, you were watching our live coverage of the iPad 2 launch live on the streets of Austin for the...