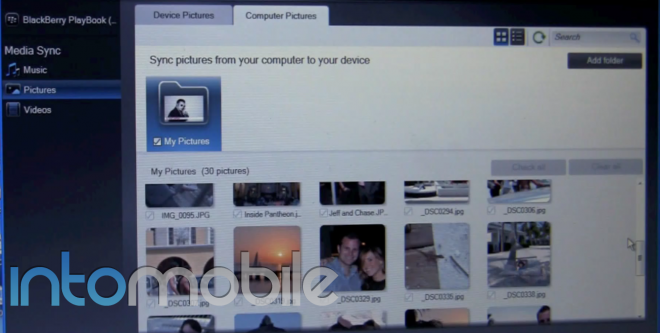 We’ve seen this software before but this is the first time we’ve seen the BlackBerry PlayBook Media Sync running live. There are a few small, but powerful features of this that may make this best the competitors.

If you’ve every had an iPod, iPhone or iPad, you know that when you sync it to iTunes you can say “goodbye” to your device for however long the content transfer will take. That’s not the case with the BlackBerry PlayBook Media Sync, as you still can use the tablet when you’re syncing content.

In the video below, you’ll notice that the tablet is a bit slow during the BlackBerry PlayBook Media Sync but that should be ironed out before the release – that’s coming super soon, they say. The QNX team is building up a new platform from the ground up, so it’s not surprising to see some 1.0 bugs in this thing.

The BlackBerry PlayBook Media Sync also does another few subtle things that I love and this includes letting you know how much space is being used in real-time. Apple iPhone owners and iOS users will know the dead zone you have on your device while you’re syncing up content and, depending on how much stuff you’re throwing on your device, that dead zone can last a while.

Another cool feature I like about the syncing feature of the RIM tablet is that it will automatically detect what content you have on your tablet and look for duplicates. For a guy who is lazy about his music management on his computer, this is a godsend for me.

Oh yeah, if you didn’t catch our exclusive video of the music store, you can check it out below.