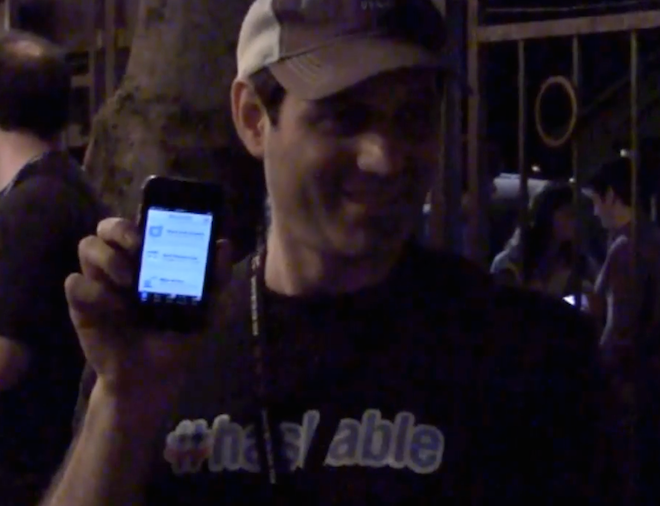 The great thing about SXSW 2011 is just roaming the beautiful Austin streets and running into CEOs and founders of really cool mobile companies. One issue with handing them a business card is that sometimes that can get lost. We spoke with Hashable CEO Michael Yavonditte about how his apps make exchanging contact information fun and social.

Hashable is an app for iPhone and Android which can best be described as your contact book in the cloud. Instead of getting a business card and entering the information in your contact list, you simply enter in a user’s e-mail or Twitter handle and you’re automatically connected with them.

You can set up your Hashable profile online to include all of your contact information or just a few tidbits. If you and I met (hi, friends), you could hit “@marinperez” in the Hashable app and then we’d be connected and it would tweet out the connection.

Like many apps today, there’s also a location-based ability to check-in with someone at lunch or another event. When other Hashable connections meet more people, you’ll be notified. This can get annoying after a while but, thankfully, you’ll be able to toggle this off.

One of the powerful features of Hashable is the ability to introduce other people through the app. These people have to have at least one person in common though, so don’t worry about meeting weirdos.

Right now, there’s only Twitter and e-mail but look for other social networking integration in the future. LinkedIn would be an obvious choice (and a perfect company to buy Hashable, actually) and I could also see Facebook as a great complement to this.

Check out the video below for our interview with the CEO Michael Yavonditte and he’ll tell you why handing out business cards is so yesterday.

Hands-on demo: Bizzy iPhone app lets you check out instead of check in

Services like Foursquare are good for checking-in and letting people know where you are but the Bizzy iPhone app is...