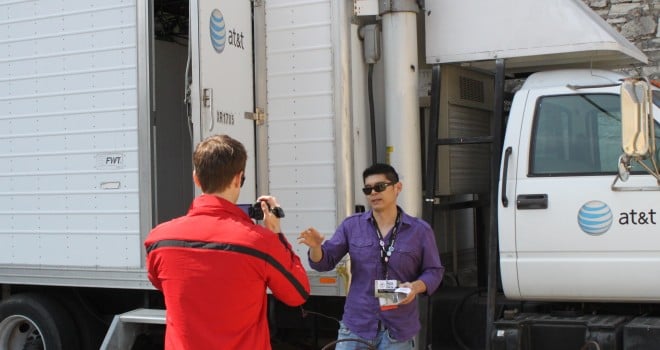 AT&T brought a bunch of COWs to Austin, TX. to keep their network up and running at the annual South By Southwest (SXSW) 2011 festival – and no, they’re not milk-making cows, they’re Cell On Wheels mobile cell towers that help boost network capacity and performance when existing cell sites are overwhelmed. So, naturally, we had to go find one of these portable cell towers to see exactly what they’re made of and to see what kind of technology makes them tick. The good news is that we found a tour and convinced AT&T to let us take a little tour inside (full 1080p HD video below). The bad news? We might have gotten our yearly dose of cellular radiation over the course of a few minutes (we kid… we hope).

AT&T has a bad reputation when it comes to reliability of their wireless network at super crowded conferences and events – like the SXSW 2011 festival that’s currently underway in Austin, TX. That apparently doesn’t sit right with the wireless carrier. To help give festival-goers stay connected at SXSW, AT&T has made some significant improvements to its downtown Austin network, as well as boosting capacity with four COWs distributed around the downtown area. The result? Well, we did have some periods of weak or non-functional data services, but voice calls and SMS text messages worked fine (save for the few requisite dropped calls). For the most part, though, AT&T’s network was on point at SXSW 2011.

In case you’re curious about the carrier’s network rejiggering, here’s a list of improvements they’ve made specifically to handle the extra load during the past and current week:

· AT&T has taken extensive steps to help ensure a good network experience for our customers attending SXSW in Austin. We worked directly with SXSW organizers to develop and implement our network enhancement plans, which include:
o Installed additional permanent cell sites to serve the venue and its surrounding areas.
o Doubled the number of Cells on Wheels (COWs) to further supplement network coverage.
§ COWs are designed to maximize coverage in areas of the city where we expect to see the highest levels of network traffic during the event.
o Added more capacity to cell sites in the area and a Distributed Antenna System (DAS) inside the Austin Convention Center.
§ Adding network capacity is essentially like adding more lanes to a highway, carrying traffic from a customer’s device to the cell tower.
§ A DAS is a network of antenna nodes that provides and enhances wireless service within a geographic area or building, and improves coverage and capacity indoors and outdoors.
o Deployed fiber-optic Ethernet backhaul connections to all cell sites in the area to increase speed and capacity of the connections that carry mobile broadband traffic from the cell site to the core network.
o Added several AT&T Wi-Fi hotspots to support SXSW, providing another broadband option for customers.
§ AT&T Wi-Fi will cover high traffic areas of the event, including Auditorium Shores and various locations along areas of 6th Street.

· A team of AT&T network engineers will monitor our network 24/7 throughout the duration of the event to help ensure the network’s performance is meeting our customers’ needs.
o With today’s advanced networks and the proliferation of smartphones, it’s easy to understand how traffic has increased at major venues and events just as it has everywhere else, and why AT&T has seen an 8,000% increase in mobile data on its network over just the past four years (2007-2010).

The iPad 2 came out last week, and some of you may still be mulling weather or not it's worth...