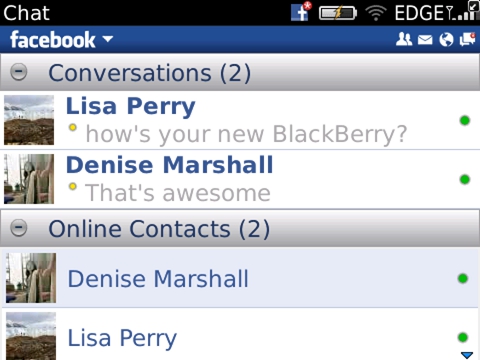 It looks like BlackBerry Traffic isn’t the only thing RIM is updating today. Facebook for BlackBerry has just gone into a limited beta, and is looking a whole lot different. The biggest feature addition is Chat, which is long overdue. The notification system has been polished up a bit, closely emulating the native drop-down BlackBerry notification bar (just for Facebook stuff instead). Navigating the primary sections of the app has been tucked into a drop-down menu next to it. The news feed has been revamped so added functions (such as Liking or commenting) is tucked away in an expandable view.

There’s a bunch of UI tweaks on top of that, but all of the usual functions, like sharing pictures, updating your Facebook page, reading updates from friends, checking in to Places, and tightly integrating the social network with your native address book are still there. Much like Facebook, RIM also handles the native Twitter application, as well as the major official instant messaging clients, like Google Talk, Yahoo! Messenger, AIM, and Windows Live.

Besides Chat, it seems like the primary goal of this update is to spit-polish the user experience and make it fall in line with the BlackBerry 6 user experience. This will be a heavy blow to third party app developers that have been creating premium Facebook chat clients, but them’s the breaks when you hinge your business strategy on providing features that should obviously be included on phones natively.

Head over to the BlackBerry Beta Zone to try to squeeze into the limited trial of Facebook 2.0, just keep in mind that it’s only for OS 6 devices for now, with promises of 4.6 compatibility down the line. If you don’t get in, one would expect the new version to be ready for public release by the time RIM’s OS 6.1 devices are launched.