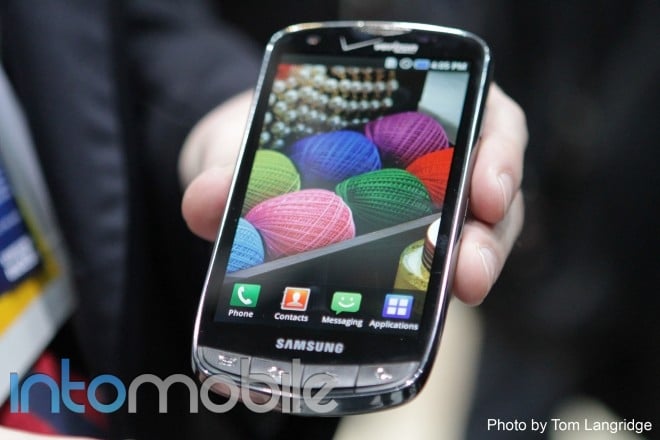 It looks like we got a name for that Samsung 4G LTE Verizon smartphone we saw at CES 2011 and it looks like this device will be coming out as the Droid Stealth and it may be available in just a few, short weeks.

According to a leaked document, the Droid Stealth specs matches up perfectly with what we saw a few months ago: 4.3-inch Super AMOLED Plus display, 1 GHz Hummingbird processor, Verizon 4G LTE support, 8-megapixel rear camera and a front-facing 1.3-megapixel camera. While some may bemoan the lack of a dual-core processor, this looks like a stellar handset that will be able to compete with what else is on the market.

The leak also suggests that the Droid Stealth with 4G LTE will launch April 7 and you’ll be able to get your pre-orders from CostCo on March 24. We should also be seeing live demo units in stores over the next few days, as well.

With the recent launch of the HTC Thunderbolt, it looks like we can look forward to a flood of 4G LTE devices from Verizon. Along with the Droid Stealth, we should also see the LG Revolution and the Droid Bionic in the next few months.

Will the Samsung Droid Stealth be differentiated enough from Motorola’s Bionic? I’m trying to figure that one out my self, as I know that I want my next phone to have 4G LTE support and multiple cameras. The problem is that I really want my next phone to have a dual-core processor because I believe that it will make it more of a future-proof device. The Bionic has it and the Stealth doesn’t.

That Super AMOLED Plus display may be changing my mind though, as it has 50% higher sub-pixel brightness than the already-stunning Super AMOLED screens. That type of drool-worthy display may make me overlook the single-core processor and the TouchWiz Ui.

A juicy leak from Three UK has revealed a bunch of release dates, as well as our first look at...