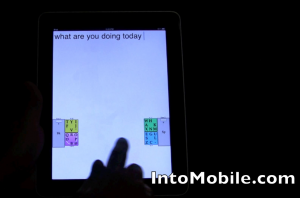 We’re here at Orlando for the CTIA 2011 trade show and we’re popped by ShowStoppers and actually found something pretty interesting. SnapKeys is touting a key-less keyboard for Android and other platforms and, despite what you may think, it may just very well work.

SnapKeys is billing this as II or Imaginary Interface – pronounced “eye-eye” – and it operates on the principle that people don’t want their keyboard to block up a large percentage of their screen real estate. The SnapKeys keyboard works by overlaying six transparent blocks over your content and all of these can be reached by your thumbs if you’re using a phone or holding a tablet in the portrait position.

The larger blocks on each end represent the space and the backspace. On each side, you have two smaller squares near the edges and this is how you input your text.

If that sounded weird and complicated to you as a person who is used to a standard keyboard that’s virtual or hardware, I completely feel you. As you can see in the video below, I was flummoxed and it didn’t make it better when SnapKeys showed me a promo video of some kids easily learning and mastering it within 10 minutes.

The SnapKeys guys will tell you that there’s no learning curve and that’s just bullshit. There is a major learning curve if you’re well established in how you type and input content. Still, I was skeptical of the Swype keyboard at first and this isn’t even as radical as a departure as this one is, but I still believe that this thing has loads of potential.

Want to use SnapKeys? Well, you can’t. It is working with handset makers and operators to preload stuff but I’m hoping it will come to its senses and release some consumer-focused product, as I know Android fans would eat this up.