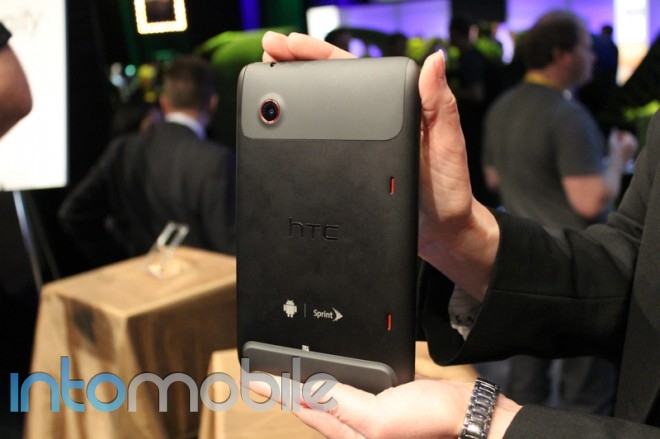 Sprint announced their version of the HTC Flyer at CTIA 2011 today, called the View 4G. Although Sprint wouldn’t let us touch the preproduction hardware, they gave us a lengthy demo showing the many uses of the pen accessory, and a tour of the hardware.

The HTC View 4G has a 1.5 GHz processor, 1 GB of RAM, 1.3 megapixel camera on the front for video calling, plus a 5 megapixel camera on the back for big boy pictures, 32 GB of internal storage plus microSD support for an additional 32 GB, Wi-Fi b/g/n with hotspot and DLNA support for media sharing, and connects to both Sprint’s EV-DO 3G and WiMAX 4G networks. It currently runs Android 2.3, but there are plans to upgrade the View 4G to Honeycomb 3.0 in the near future. Its signature feature is a pen that works with the capacitive display, enabling users to sign documents, annotate e-books, and add notes to screenshots.

In my time checking it out, the View 4G ran smoothly, and was a nice size (with an especially slim profile and solid construction, as we would expect from HTC). The thing that leaped out most to me was the notes application, and how useful it would be for students in lectures. Notes are shared up to the cloud through Evernote, so you and your friends friends can access them easily anywhere, plus you can tack on audio up to two hours in length – perfect for future reference in those lengthy classes. I hope that HTC is opening up the pen accessory with an SDK so third-party app developers can explore new use cases, however nichey they may be.

The HTC View 4G is coming to Sprint this summer (price undisclosed), but in the meantime here are some stills, with 1080p HD video to come shortly.