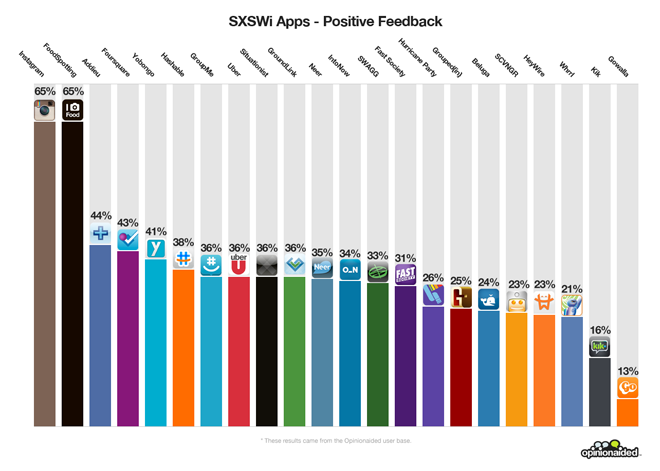 Opinionaided, recently reviewed on IntoMobile, decided to use its far-reaching user base to learn which social apps were considered popular  outside of the SXSW conference. According to these types of preliminary, vague, and inconclusive “reports,” Foursquare won the location battle (I say “battle” because the war is pretty much over) with Gowalla trailing in second, and GroupMe won the group messaging war with Beluga at a sad, distant second.

The IntoMobile team started the conference using Beluga, but eventually switched to GroupMe since Beluga is so incredibly buggy. Maybe this is something Facebook can fix. In our experience chats in Beluga would randomly and temporarily lose several hours worth of data. No one argued when a transition to GroupMe was suggested.

Now let’s take a look at Opinionaided’s data. What exactly are we looking at? Approval ratings. Opinionaided employees uploaded screenshots from these apps and asked simple questions like “Do you like Foursquare”? or “Do you like Uber?” Users have two options when voting: thumbs up or thumbs down. For example, 65% of Opinionaided users who saw the question about Instagram gave a thumbs up rating. Keep in mind that these results were gathered from an audience consisting of smartphone owners who have not only heard of many of these apps, but have actually used them too. There’s nothing scientific or thorough about this study, and, along with the pundits’ reports, they should be taken with a huge bucket of salt. On a personal note, as a published author of scientific research, these studies are insulting, and should only be mentioned after a moment of silence during a debate about who’s going to win this year on Dancing With the Stars.

Anyone who attended SXSW should be shocked by some of these results.

IntoMobile readers who attended SXSW: what were you favorite apps? Which have lived up to the hype for you?

AT&T announced it will be bringing the Thrill 4G to the market and this will be the Optimus 3D with...