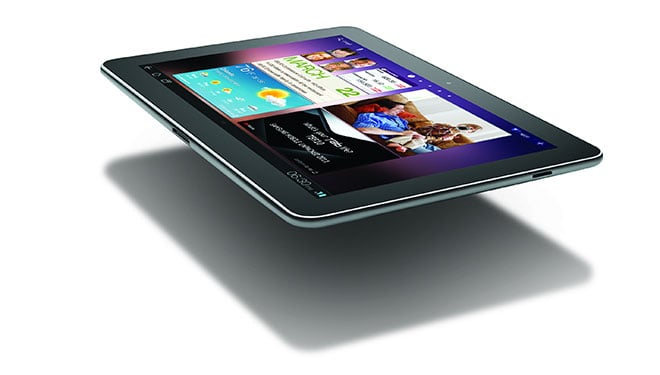 The 10.1 model was to become the thinnest, large-screen tablet on the market with a profile that is 8.6 mm thin and weighs in at a mere 595 grams. Besides its thin profile, the Galaxy Tab 10.1 includes a 1 GHz dual-core processor, a 10.1-inch display with 1280×800 resolution, 4G connectivity (HSPA+ 21 Mbps now and LTE/WiMAX in the future), WiFi 8012.11 b/g/n, 2-megapixel front camera, 720P HD video recording with the rear-facing 3.0 megapixel camera, full HD video playback, stereo speakers, easy-grip material on the back, and a 6800 mAh battery.

To complement its Android 3.0 Honeycomb mobile operating system, Samsung also updated its TouchWiz UX which is optimized for Android tablets with live panels, a mini application tray, a social hub and more. Samsung also added in a dedicated music hub and, in the United States, a media streaming and download hub. Rounding out the Galaxy Tab is a series of accessories which include the Samsung stick Bluetooth headset that fits in your pocket, a sound station dock, an HDMI charging dock, USB connection kit for USB devices like printers and cameras, and a bookcover case that functions as a stand.

Samsung also introduced the Galaxy Tab 8.9 which will mirror the 10.1-inch model with a super thin and lightweight (470 grams) profile. The 8.9-inch table includes the same high-resolution display as its 10.1-inch cousin as well as a dual-core processor, 6000 mAh battery, WiFi and the other core specifications noted in the 10.1-inch model above.

The WiFi versions of the tablet device will debut in the upcoming months in the United States. The Galaxy Tab 10.1 will be available in 16 GB and 32 GB capacity for $499 and $599 respectively, while the Galaxy Tab 8.9 will debut as a 16 GB model for $469 and a 32 GB model for $569. The 10-inch model will go on sale starting on June 8th, while the 8.9 version will debut in the early summer. The 4G versions will be released at a later, unannounced date.

We're live at Samsung's CTIA 2011 press event, where we're looking forward to seeing what the smartphone maker is unleashing...