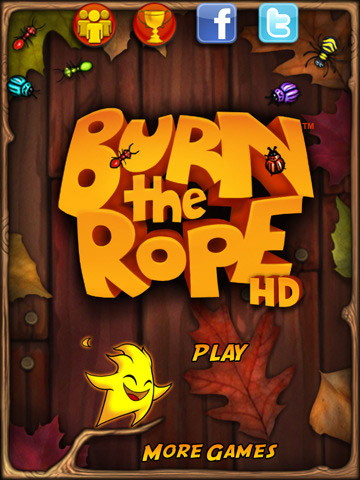 Big Blue Bubble released an HD version of its popular iPhone game Burn the Rope to appeal to the iPad users. The new version of the game obviously takes advantage of the Apple tablet’s bigger screen, while also sporting brighter fire and an “innovative new touch control scheme” that lets players rotate the puzzle onscreen.

The gameplay remains the same (when compared to the iPhone version), seeing you burning as much rope as possible on each level. The fire only burns upwards, so you must rotate the rope to keep the flame going, and once all the flames are out, it’s game over.

Along the way, you’ll also be burning various bugs which can help your efforts, but also stop you from progressing to the next level.

Speaking of levels, in total there are 116 rounds included as well as bonus bug-blasting levels. Finally, Big Blue Bubble promised to update the game with new levels in the coming weeks and months…

Opinionaided: The Simple Way To Share and Receive Opinions on Your iPhone

A new iPhone app, Opinionaided, allows you to quickly ask questions and gather opinions from a community of passionate users. It is...