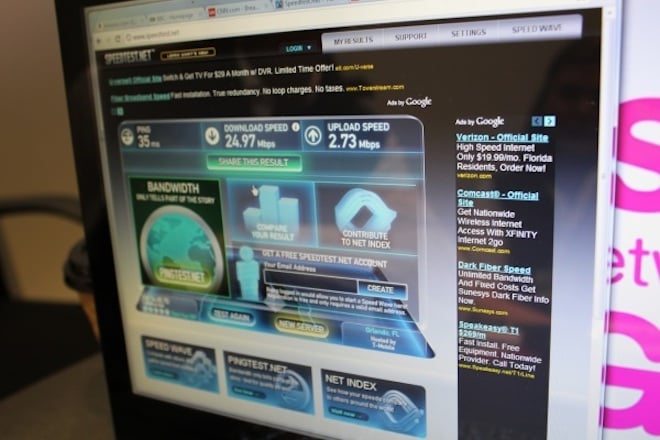 T-Mobile was the last of the major North American operators to launch a 3G network and because of that they were mocked as being out of touch and branded as a firm that will always remain small. When the company decided to slap the “4G” label on their new 21 Mbps HSPA+ network they were mocked yet again, but now that HSPA+ 42 is turned on, and there are actual products hitting the market that support it, just how well are they competing? Pretty damn good according to Laptop Magazine, who was at the 2011 CTIA event in Florida this past week and gave T-Mobile’s new Rocket 3.0 USB modem a run around the block. They found that they could easily achieve download speeds of 25 Mbps, upload speeds of 2.75 Mbps, and ping times well under 50 milliseconds. Those are pretty much the same numbers you can expect to pull on Verizon’s 4G LTE network. How about them apples?

Now there are a few minor niggles. First, Verizon’s high speed network covers more people. Second, Verizon’s actually shipping a phone, the Thunderbolt, that supports their new network. Third, T-Mobile doesn’t really have that much time left to live. Once they merge with AT&T, and this is expected to take place around this time next year, you can expect AT&T to bungle things up and push their silly data caps on people. Does this detract from T-Mobile’s accomplishment? No, not in the slightest, since there’s a much greater chance that we’ll see a slew of 42 Mbps HSPA+ devices being released this year versus the Frankenstein mess involved with making something that supports both CDMA and LTE.

Many networks in Europe are already running at 42 Mbps or plan to upgrade this year, so it’s telling that these types of numbers will make their way across the pond at some point when hardware that can support these speeds hits the market.

Good folks of FCC approved the LG P920, which as you may know is the other name for the Optimus...