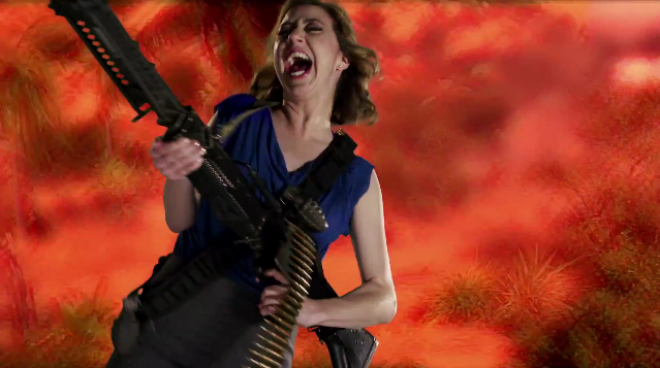 Looks like Sony Ericsson  either grew tired of creeping out their potential Xperia Play buyers, or they just wanted to go another route, but first Playstation certified phone’s ad campaign has been dramatically changed.

The shift for the Xperia Play’s ad campaign is now on the funnier side of things, as Kristen Shaal (Bob’s Burgers, The Daily Show with Jon Stewart) is now the new face of the ads. In a set of 5 ads that range from hilarious to still-funny-just-a-little-weird, the new campaign will bring the Xperia Play to potential gamers with more relevant twist.

All of the ads show off the Play’s great feature-set, one of which goes head to head with the iPhone 4’s gaming controls – or lack thereof. It’s an interesting shift, and may appeal to more people than black market thumb heist ads. It also doesn’t hurt adding an up and coming comedienne to the mix.

The Xperia Play is a great device, it just needs to be dual-core in my opinion. The competition is hot, and if Sony wanted to knock it out of the park, it would have basically created a PSP Go with NGP specs, a glasses-free 3D display, with phone functionality. Easy enough, right? Ok, maybe not, but Sony should be working on a product that combines all of the great features of its existing lineup into one product, and that likely won’t happen until we see the Xperia Play 2 announced.

Despite any wishes some may have for the Xperia Play, the Playstation phone is upon us, and that alone should be good enough for many people. The semi-working Playstation emulator won’t be put out of commission, but honestly, let’s hope someone figures out how to rip the Playstation Suite out of the Play for others to enjoy.

Do you like the new campaign, or were you a fan of first round of Play ads?

Check out the new ads below:

There's some good news for those of you rocking the AT&T Inspire 4G: it looks like AT&T has received FCC...