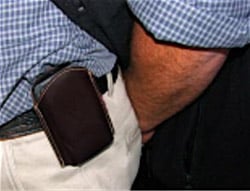 We’ve already heard mobile phone radiation can cause cancer of the brain. Like that’s not enough, a new research suggests it [radiation] can also affect our bones.

Dr Fernando Sravi of Argentina’s National University of Cuyo found that men who routinely wear their cell phone on their belt on the right side have reduced bone mineral content (BMC) and bone mineral density (BMD) in their right hip.

“The different patterns of right-left asymmetry in femoral bone mineral found in mobile cell phone users and non-users are consistent with a nonthermal effect of electromagnetic radiofrequency waves not previously described,” he said.

Apparently the men who wore their cellphones on the right side had a lower femoral neck BMC in that hip than the men who never carried one. Moreover, the cellphone users also had reduced BMD and BMC at the right trochanter, which is the area at the outside top of the thigh bone.

Although larger follow-up studies will be needed, the study does raise the possibility that long-term exposure to electromagnetic radiation from mobile phones could adversely affect bone mineralization… Any thoughts?

As part of its quest to become Google of China, Baidu has already launched a Twitter-like service and announced plans...