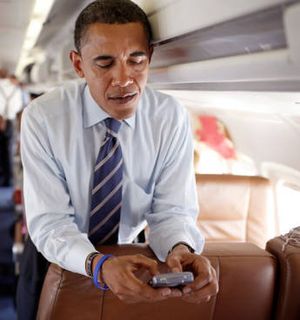 It turns out that our tech-savvy president, Barack Obama, isn’t just a die-hard BlackBerry fanatic, but he also owns an Apple iPad, too. Are any one of us really surprised? I mean, this thing got a huge endorsement from Oprah during the holiday season last year, and you can find it in hotels and high-end retail stores in major cities. No Android tablet enjoys the same popularity.

But it’s not all tablets and iOS for the president – he’s still very much tied to his beloved BlackBerry. MarketWatch reports:

“I took my BlackBerry off for this show, because I didn’t want it going off, and that would be really embarrassing,” Obama said at a town hall meeting hosted by Spanish-language network Univision (the network will broadcast the town hall on Monday night). “But usually I carry a BlackBerry around,” Obama told anchor Jorge Ramos, referring to Research In Motion Ltd.’s smartphone.

Despite being into gadgets, Mr. Obama still certainly has manners about usage!

The new version of the Apple tablet is out now, though trying to buy one has been a rather elusive prospect for many people since it’s selling out as fast as retail stores get them. The iPad 2 is thinner than its predecessor, has a faster processor and features front and rear cameras for videos, still images and video-calling.

If you’re thinking of emulating Mr. Obama in his tech savvy ways, be sure to check out our review of the iPad 2 first before heading out to grab one!

Could the iPhone 5 sell 100 million units?

The Apple iPhone has been a massive success, as this smartphone kicked off the mobile revolution we're seeing today and...