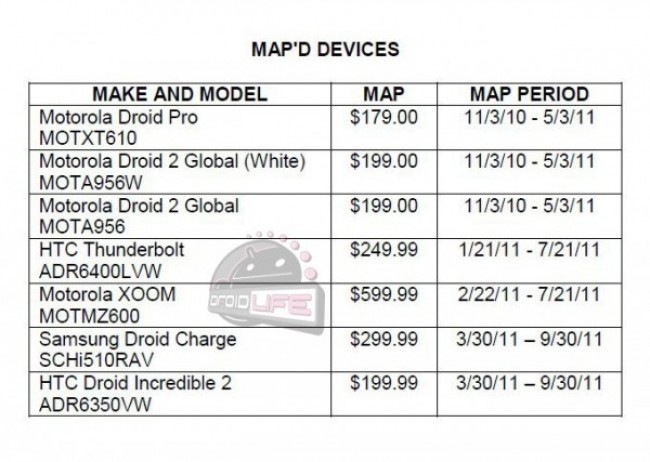 Looking forward to the upcoming Verizon Droid Charge from Samsung this year? If this leaked pricing guide holds true, expect to pay the big bucks for it, as it’s even more pricey than the Thunderbolt. Along with Samsung’s LTE device, the Droid Incredible 2 decided to make an appearance, at a decidedly more affordable price point.

Having to cough up $250 for the Thunderbolt may have been a bit too much for some potential buyers, but it looks like Verizon’s LTE devices will come a premium. Charging more for a handset may help Verizon keep their data plan prices down, which makes it all the more worthwhile at the end of the day. The Droid Charge will run you $299 on a new contract; $100 more than the average on-contract price of a new smartphone today. Then again, the once nameless handset we played with at CTIA from Samsung looked solid, but it may be priced out of some would-be buyers’ price range.

Those not looking to pay up an extra Benjamin for the Charge can look to the sequel to the popular Droid Incredible, which looks like it will run for $199 on contract. We’d be surprised to see the Incredible 2 sporting LTE, as the price point just doesn’t seem to fit the trend. Nonetheless, the original Incredible was one hell of a phone, so we’d imagine that the Droid Incredible 2 will take everything from the original and build upon it with specs and sexiness.

These are but two of the Android assault squad that Verizon is readying for the summer smartphone battle. We’re still waiting on the Droid Bionic from Motorola and the LG Revolution to grace us with their presence before we can say, “game on.”

Would you willing to drop three bills on the Droid Charge?

Back in late December, we published a review for an iOS & Android title called Dungeon Defenders which is one...