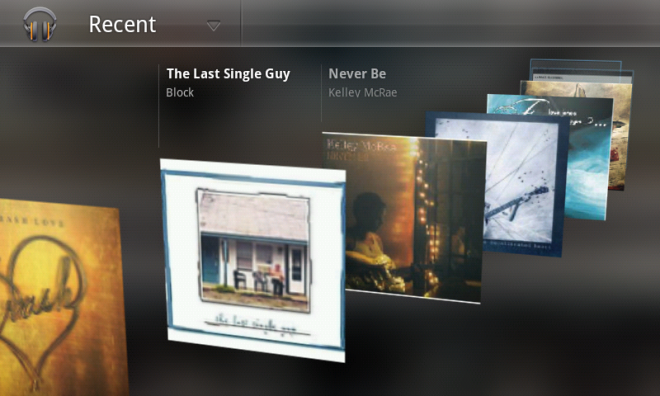 Remember the Honeycomb music player that leaked a while back, giving the Android music player for phones a much-needed facelift? Well, a newer version of said music player has leaked out, and this time around there’re a couple more goodies packed inside.

Not much has changed from the previous version, but the most significant change is the new “recent” option in the player. When in landscape mode, you’ll find the categories tucked in a tab on the top left of the screen. Simply tap on the tab, and select “recent”, and you’ll now see the Honeycomb-like scroll wheel for your music. Virtually the same as what you’d find on the Xoom, the new recent section of the music player is gorgeous.

The Jumper Test app doesn’t appear in this version, which is what links the music player to your Google account. There’s been some talk that the service has gone live, unofficially, which may be the reason that the extra application wasn’t included with this version. Then again, we still have no desktop client to sync music to the cloud, so whatever success people have experienced likely hasn’t been complete. Nonetheless, this new version certainly looks to be one step closer to the release of the updated app, and Google Music.

While we were expecting it sooner, Google will likely announce its music service during Google’s I/O conference in May. Amazon has beaten Google to the punch, but that doesn’t mean there aren’t plenty of people looking forward to the search giant’s take on a streaming music service. Having the option to buy music right from the Android Market sounds like a great idea, and we’re glad to see that Google is ridding the OS of the existing, sterile music player it currently ships with.

Hit up this link here to download the new Android music player!