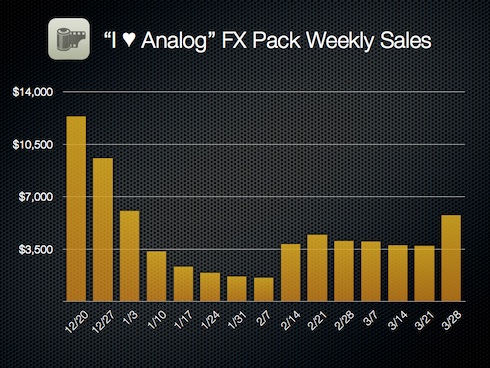 Camera+, my favorite photography app for the iPhone, announced yesterday that it has reached 2 million sales through the iTunes App Store. The app initially launched last summer, but was taken off the market and introduced again late in 2010 after some changes were made to suit Apple’s strict demands. The company behind the app, Tap Tap Tap, says that the second million copies sold happened in just under three months. It’s quite an achievement, and I’m happy for them, but it’s also not much of a surprise considering the press it has been getting lately.

Interestingly, a figure we rarely ever see is that of in-app purchases. Many free and paid apps generate income and supplemental income from in-app purchases, so one has to wonder just how many users actually opt in for the extra perks. According to Tap Tap Tap, on any given day roughly 5% of Camera+ users will purchase its “I Heart Analog” filter pack.

The in-app pack adds a number of additional filters that give photos a retro look, mimicking the look of certain cameras from the film days of yore.

The sales of the optional pack haven’t been huge, but it adds some nice padding to actual app sales:

So while almost $70k over roughly a 4.5 month period is absolutely nothing to sneeze at, it’s a relatively small amount compared to what Camera+ earns through sales of the app itself. Like I said… supplemental income. There are companies with free photography apps that are trying to have their business models revolve around selling effects via in-app purchases, but it’s very unlikely that this can be an effective business model.

Not too shabby for a $0.99 option! I’m glad to see that Camera+ is doing pretty well, because I do enjoy the app myself, so here’s to hoping that cool new features and maybe additional packs are added some time in the future.

How many iPad 2 units is Apple planning to sell this year? A lot, that's how many. Apple rarely ever...