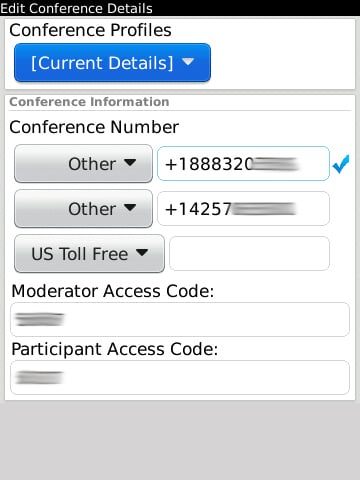 RIM has launched a small but potent addition to the native calendar app which lets you launch easily and quickly into conference calls on a BlackBerry. Once the installed, BlackBerry Mobile Conferencing puts a new option appears in the native Calendar menu and within appointments themselves to add or edit conference call data. If you were invited to one, and call information was included in the description, conference call-in numbers and passcodes are automatically filled in, and when it’s time to start, you just hit “join now” and the phone application will get you into the call automatically. Moderator codes can also be included, but they’re held secure and sent only to those who are designated in the invite list. Should you drop the call because of coverage or other technical difficulties, there’s a one-click reconnect option to get you back on the line.

The BlackBerry phone application already has some conference calling functions built in, like the big “Add Participant” button in the native phone app, as well as the “Split Call” option in the menu, but this new app really extends things significantly. The BlackBerry Mobile Conferencing App is available in the BlackBerry Beta Zone for the time being, if you want to give it a shot.