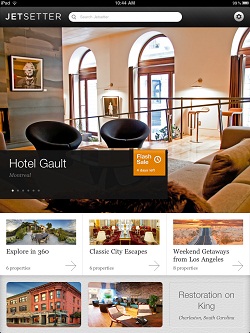 We got a chance to check out the new Jetsetter iPad app today and it’s a visually-impressive way to check out luxury travel deals on your tablet.

If you haven’t checked out the service, it’s kind of like Groupon for luxury travel – the company secures deals for up to 50% off the normal costs. While most of it is still a bit out of my price range sadly, I noticed that there are some legitimate bargains. I recently went to New York and spent my time in a decent but small hotel that only cost about $30 less than one of the offerings in the app.

The Jetsetter iPad app lets you view these deals on the tablet and it’s full of gorgeous pictures of the hotels. Along with the room information, you can also find reviews, comments, nearby attractions and more.

Booking a room is pretty simple and the whole app is filled with little transition animations that make it very pleasing to the eye. With this and the recently-released Bing app, the Apple tablet is getting some gorgeous apps.

The cool thing about the Jetsetter iPad app is that it offers 360-degree photos of some of the locations. We’ve seen this on many hotel websites but this may be the first time a program has this on the tablet. This could come in handy because you never know if those sexy photos on the hotel’s homepage have been shot in a way to make it look better than it is.

It’s not all roses though, as the Jetsetter iPad app doesn’t have a landscape mode. I might buy a single orientation in a magazine but there’s no excuse for this with this type of luxury travel program.

Also, the program seems to run a little slow and the cool transition animations mask that a bit but I hope the updated version is faster. It’s free and you can check it out here (iTunes link).

Gartner has just released their forecast for the global mobile market reaching out to 2015, and as you might expect,...