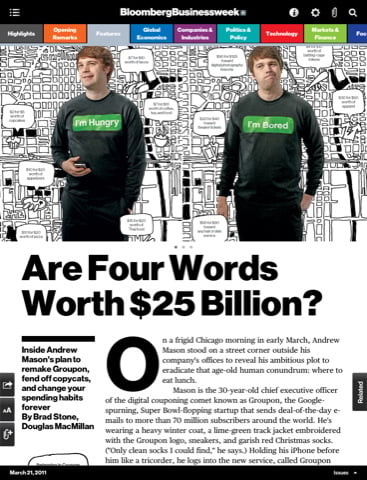 Everyone is jumping on the iPad bandwagon, and this time around it’s Bloomberg Businessweek with a new iPad edition of its publication. News outlets and magazines are quickly making iPad-friendly versions of their publications, and they’re becoming just as popular, too. Two editions of the publication have already been released on the iPad, and according to Mashable, they’re not half bad:

The issues are sleek, colorful and designed with the iPad reader in mind. Enhancements are useful rather than flashy; readers can, for instance, clip articles for later reading across multiple devices, adjust the font size, and pull up additional information about cited companies, such as stock quotes and recent news, in a righthand sidebar (Internet connection required). Other additions, such as the ability to read the magazine in both horizontal and vertical formats, and search across multiple issues, merit a truly grade-A experience in the digital magazine category.

It sounds a bit over-dramatic to me, but I guess I’ll just have to find out for myself. The images and screen grabs do look impressive, however, and if it doesn’t suffer the lag and loading issues that publications like The Daily does, then it just might be worth the $2.99 per four issues that Bloomberg Businessweek is charging. Or you can get the iPad version free if you subscribe to a 26-week print copy of the publication, but that might defeat the purpose of going all-digital, don’t you think?

The app itself is free and now available via iTunes.

In research note released this morning, Avian Securities claims the iPhone 5 will not enter production until September 2011. This...