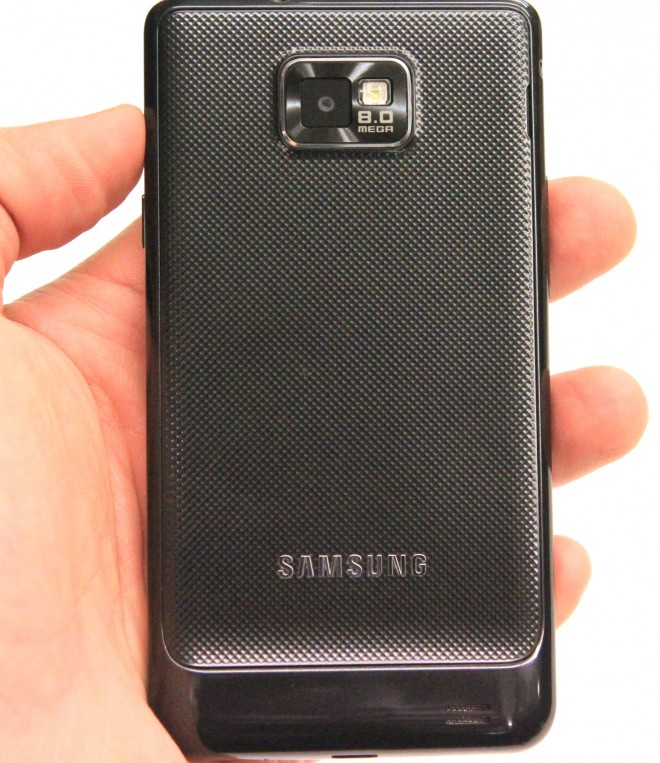 The successor to the Samsung Galaxy S is due to arrive in the UK on May 1, which pretty much confirms what we already knew in terms of a release date for the Galaxy S 2. Folks who are fans of the original Galaxy S series has this beast of a phone to look forward to. It has a 1.2GHz processor, which ought to be more than enough for your daily needs, and it’s running the latest and greatest version of Android – 2.3 Gingerbread.

This Android handset really can do it all (short of all the fancy, gimmicky new 3D stuff). It can record 1080p videos, it has TouchWiz 4.0 UI and it’s anorexic-thin at just 8.49 millimeters thick – or thin, I should say.

If you want to know all the glorious details and specs, see the press release below.

11th April 2011, London, UK – Samsung Electronics Co. Ltd., today announces that its slimmest and lightest smartphone yet, the Samsung Galaxy S II (Model: GT-I9100), will be available in UK shops on 1st May 2011. The Galaxy S II is the first handset to offer Samsung’s Super AMOLED Plus screen technology, the largest, brightest and most colourful screen available in Samsung’s portfolio of devices.

Super slim (8.49mm) and lightweight (116g) Samsung’s Galaxy S II runs on Android 2.3 (Gingerbread) and is super-fast thanks to its dual-core 1.2GHz processor. The device’s exceptionally bright screen makes it perfect for watching movies and TV or playing games and looking at apps, with its ground-breaking ‘organic’ LED technology, Super AMOLED Plus also saving energy so you can enjoy watching content without affecting the battery life.

The Galaxy S II is built for multi-tasking, its dual-core processor makes switching between applications and loading web pages such as Google, Yahoo and YouTube quick, whilst superior 3D hardware means games and videos can be loaded and played with ease. What’s more, there’s immediate access to content and services such as catch up TV and movie downloads, thanks to super-fast connectivity and WiFi, with speeds up to 21Mbps which provides increased download speeds, and Bluetooth 3.0+HS which reduces data transfer times significantly.

Simon Stanford, Managing Director, Mobile, Samsung UK and Ireland said: “From the moment it was revealed at Mobile World Congress in Barcelona there has been a huge buzz about the Galaxy S II, so we’re pleased to announce that it will be available for UK customers to buy from 1st May. Our slimmest, lightest, fastest smartphone is our first device to offer of Super AMOLED Plus screen technology, alongside the most advanced technical specifications including the latest Android OS and a dual core processor. We’re confident it’s a great package for anyone wanting a superior smartphone experience.”

The Galaxy S II also features an 8 megapixel camera with 1080p HD recording and playback, Samsung’s patented AllShare technology so you can share pictures, movies, and music with other devices and Samsung’s new Kies Air which lets people manage their smartphone contents from their PC via local WiFi connections.

A new ‘Live Panel’ feature on the Galaxy S II allows aggregation of live web, social networking and application contents to a single customisable home-screen, whilst it’s possible to place all the important parts of your life onto three adjacent home screens which you can switch between simply by pressing and holding on the screen. As with all the Samsung Galaxy family, the Galaxy S II features Samsung Hubs, providing a huge range of entertainment content, advanced mobile games and the ability to manage social networking accounts.

The Samsung Galaxy S II will be available in the UK across all major networks and retailers.

A few weeks ago, Adobe gave a glimpse of full Photoshop running on the iPad, but Apple's not the only...