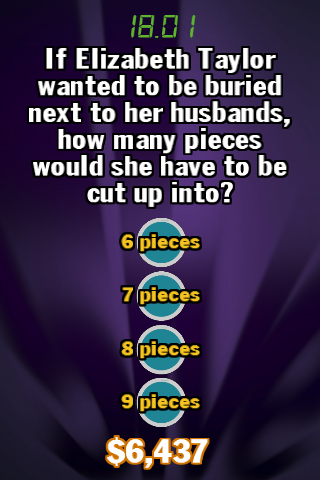 You Don’t Know Jack, a classic trivia video game with a smartass host, has been announced for the iPhone. It comes with 20 episodes, complete with leaderboards and Game Center achievements, and the usual batch of multiple choice questions , DisOrDat (where you have to quickly categorize incoming terms into particular topics), and the final Jack Attack round, where you have to sound the buzzer when something related to your assigned topic shows up on screen. There are also speciality rounds like “Who’s the Dummy?”, “Funky Trash” and “Cookie’s Fortune” which I’m less familiar with, but am sure are still totally awesome.

You Don’t Know Jack is a personal favourite of mine; I played it way back in the early 2000s when it was a webshow with new weekly content. What made it interesting is that, like a real game show, there were full Flash advertisements between rounds, which kept the content free. Since the game was so great, and the “commercial break” was such a natural thing for what was supposed to be a TV show, the ads weren’t actually that bad at all, and I imagine if they continued the model with really off-the-wall campaigns such as Old Spice’s, they could have kept it up.

You Don’t Know Jack will be available in standard and HD (presumably for the iPhone 3GS and up) with regular and Lite varieties (I’m guessing free with ad support and premium). Keep an eye out for it in the App Store soon, but in the meantime, here’s a sample gameplay video which should give you a taste of the humour to look forward to.

CyanogenMod 7 goes final with Android 2.3.3 Gingerbread ROM for the masses

The Android 2.3.3 Gingerbread-based custom ROM, CyanogenMod 7, has officially gone final with its newest, stable release. The team behind...